If organizing feels overwhelming, you’ve probably had many false starts. You’ve “gotten organized” only to feel like you’ve “failed” just a day or so later. You are looking for “tips” that everyone else seems to know. You’ve bought so many organizing products that they’ve now become piles of clutter. How to break the cycle? SORT and Succeed are the five steps that will get you all the way through the organizing steps, but some people still feel like that’s four steps too many. Let me clue you into “glides,” a way of thinking of organizing that’s ridiculously easy. 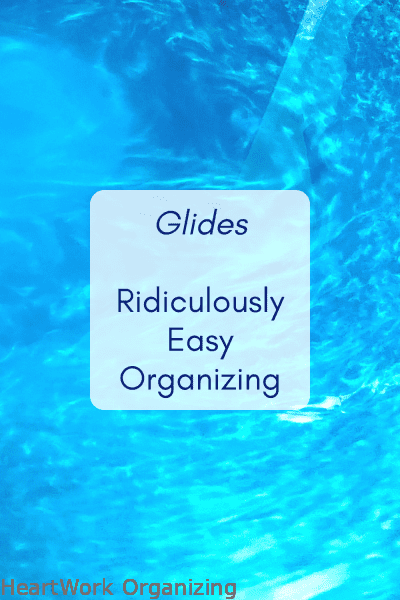 Last year I started physical therapy for my arm. Part of my prescribed routines were glides. I asked my doc how much stress I was supposed to put on the muscles during the glides, and she said none.

Nerve glides are literally “going through the motions.”

You aren’t supposed to feel stress or weight or pain at any point during the motion.

Glides retrain the nerves to move in their channels and sheaths without triggering pain.

I’ve been thinking about glides a lot for organizing. People expect that organizing has to be a BIG project to work. They don’t want to start organizing because they feel like they’ll have to organize forever and it’s going to be painful.

If you are overcome with piles, crammed closets, and and covered counters, you can use the concept of organizing “glides.” Ridiculously easy organizing tasks that feel like they aren’t doing anything…

Throw a tissue away instead of putting it on the nightstand. Even better, put a trash can under your nightstand so throwing it away takes no effort!

Put your toothbrush in the same cup your rinse with instead of laying it on the bathroom counter.

Take your shoes off by the door instead of kicking them off at the couch.

Does any of this sound hard? We’re going for ridiculously easy!

Do a small load of laundry instead of a big one, so there’s less to fold at one time.

Put your dinner plate in the dishwasher instead of the sink. Then there are no dishes to clean up later.

Toss junk mail before you go inside your house, and it never has a chance to collect on the counter.

Toss a broken pen instead of putting it back in the drawer.

Sure, you say, I can do these things, but they won’t get me organized.

Oh, grasshopper, that’s where you are wrong. This is exactly how organized people stay organized!

I’ll tell you a secret…I don’t make my bed, but I do pull the covers up after I get out of bed each morning. It the cheater’s trick takes me less than 10 seconds.

I don’t even fold my pajamas! I stow them under the pillow.

Not everything in life can be boiled down to ridiculously easy tasks, but I take them where I can get them. You’re still going to have to wash pots and pans at some point, right? But sometimes I put foil on my sheet pan and toss it instead of scrubbing baked-on food.

They feel like they aren’t making a difference, but they do.

Every little thing that you do to be more organized in the moment means you don’t have to carve out time later to “get organized.”

A classic organizing rule is this: if it takes 2 minutes or less to do something, do it now. 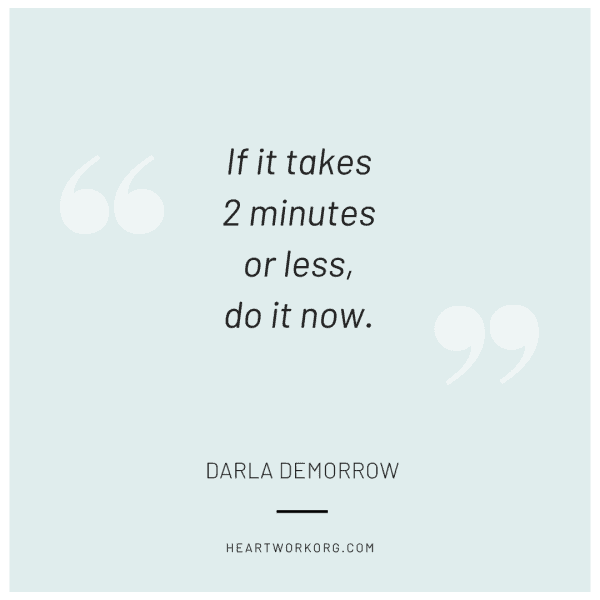 Here’s another take on this: just five minutes.

I’m always looking for glides, organizing actions that seem like nothing but have a big cumulative effect. What have you found that works in your life?

The Art of Laundry

Feeling Poor? Check Your Bags (Organizing Your Home With Returns)

How to Maximize Under Bed Storage

How to Use Mind Maps to Organize Your Life