Just a reminder, because organizing is a hot topic in January, I send out a short email every day to inspire your organizing efforts. We’ll be back to a weekly format in February. If you miss a post, you can always find the latest on my site or my Instagram. 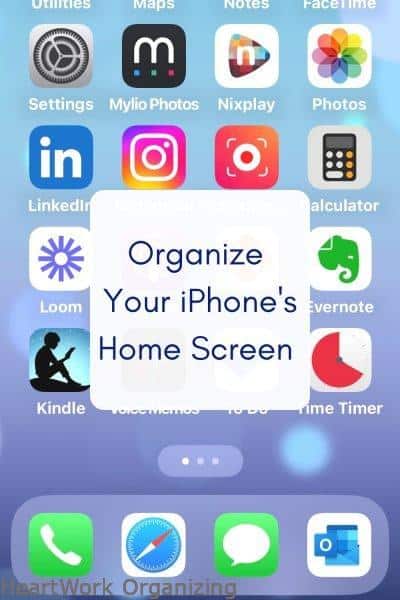 How many apps do you have on your phone? It seems like every store, restaurant, and gaming company wants to take up your digital real estate. Every app you load sucks up a little bit of your device’s memory, makes you swipe a little more to get to the stuff you need, and has the possibility of introducing nasties like location trackers. Do you really want every company that has an app on your phone to know where you’ve been??

You already know that you swipe left and right to get to the next “page” of apps on your phone. If you look at the bottom of your screen, you’ll see little dots that tell you how many “pages” of apps you have. The app you loaded last will typically show up on the last page.

For Android users the mechanics are just a little different, but you can organize an Android phone the same way.

How to Organize your iPhone by Deleting Apps

If you don’t need an app any longer, delete it. Here’s how to delete apps. Press the pad of your finger down on any app icon and hold it there for two seconds and pull your finger off the screen when you’ll see this screen. (This is called a long press, as opposed to a tap.)

If you want to delete that app, tap on “Remove App.” The app leaves your phone and frees up memory. If the app is tied to a cloud service, your data is probably still accessible via the web and your other devices. For example, if you remove the Kindle reading app from your phone, your books are still accessible via the web, your iPad, and your computer. You can always reload the app later, and your books will still be there.

How to Move Apps on your iPhone’s Home Screen

You might notice that your home screen “pages” aren’t all full. I recently organized a phone that had 9 pages, all with only 3-5 apps on each screen. That’s a lot of unnecessary swiping!

Here’s how to move apps on your home screen. Long press on any app, but this time leave your finger down for 3 seconds or more, and all the apps will start to jiggle and you’ll see a dash in the top left corner.

Now that the apps are activated (jiggling), long press on the app you’d like to move, and slide it around on its current page. Slide it in between other apps and let it go to change its position on the page. I like to keep my apps in order according to frequency of use. If I use it all the time, it stays on my first page, one of the first 24 apps.

If you want to move an app to another page, long press and slide it to the right or left edge of your screen, then slide it just a little more, and the app will jump to the next (or previous) page. This might take a couple of tries, but it makes it so much easier to get to what you need. See the Evernote app with the elephant below? I’ll keep pressing and sliding that to the right, and it’s going to jump to the next page of icons.

Organize Apps Into or Out of Folders

The gray squares are folders that you can use to group 2 or more apps. It’s easy to use folders. While the apps are activated (jiggling), long press on one app icon and slide it directly over another app icon, then let go. They will group into a new gray folder.

Here’s what it looks like what I want to group my social media accounts together. I drop the Instagram icon on top of the LinkedIn icon, and I get a new folder that Apple names Photo & Video. I can rename that to Social Media or anything else that I want.

Folders help keep things tidy. Group similar apps together, all social media or all banking, for example. Or group for a certain event. When I travel, I group the airline, the public transportation, and the conference apps all together.

If you accidentally group things into folders, it’s easy to get them out. Tap on the folder once to open it, and it’ll float to take over your full screen.

Long press on any app in the folder and drag it outside the gray boundaries of the folder. It will return to your home screen.

Move folders around your screen or onto other pages the same way you move individual app icons.

How Long to Organize your iPhone’s Home Screen?

Deleting unwanted apps, moving your most-used apps onto the first page of your Home Screen, and grouping a few apps into folders should take you 10 minutes, tops. It kind of feels like a video game, but the prize is a more organized day!

If you already knew all of this, great! You are probably more tech-savvy than the average bear. Go organize a drawer, a basket, a closet, or any one of the other suggested organizing projects for this month.

Get Organized in 2010: Lose 30 Pounds Instantly

Convert a Closet to a Pantry

This Organizing Tip Can Save You Hundreds!