Have you heard of towel stripping, also called laundry stripping? It’s a big trend on TikTok. I made it all the way through lockdown without caving to the pressure but finally gave it a try. Was it worth it? 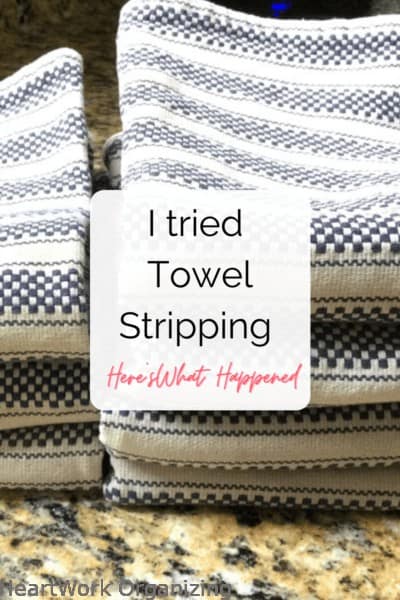 I’d love to know how to keep my laundry really, really white. I have all-white towels in the bathroom and toss the hand towel into the laundry every single day. It’s a sanitary little luxury, and haven’t we been all about that for the last year? Sticking with all white, they always match, but are they always bright white? Sadly, no.

Some people think the answer is more bleach, but unless I’m in a clinical setting (or battling a deadly virus), bleach is not only unnecessary, it’s the nuclear option. It’s not great for our water supply or our health in general. Bleach fumes make me sick. I’m really ok with a little less brightness in my towel drawer if it reduces chemicals coming out of my washer. Also, bleach yellows clothes over time, and that’s the problem I’m trying to fix.

But could towel stripping rehabilitate my kitchen towels? Hmmmm.

I pulled the how-to info from this Real Simple article, What is Laundry Stripping? that claims it’s gross-but-satisfying.

My kitchen towels are basic cotton bar-mop style with navy stripes on a white background. They aren’t special, but they’ve held up really well over the last five years or more, and that’s a long time for towels.

Every morning I swap two fresh kitchen towels and a washable kitchen sponge (affiliate link). Even so, they suffer heavy use with hand-washing for the whole family and cooking at home every day. So, yeah, if laundry stripping once a year could help, I’m game to try. Since kitchen towels are much smaller than bath towels, that seemed like the right investment of time and water.

This is the problem. The ends of the towels are permanently stained, as you can see on the right side. 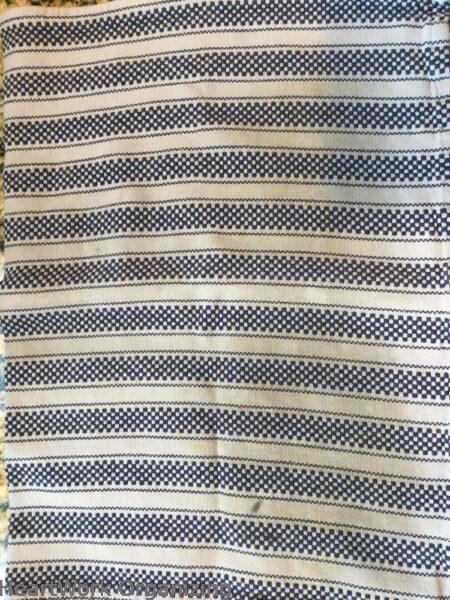 You are supposed to start the laundry stripping process with hot water, so I went to simmer in two big sauce pots, then turned off the heat and added the towels and cleaners, Borax and laundry soap. With no washing soda on hand, I substituted baking soda, which I always have. I know, it’s not the same, but worth a try. 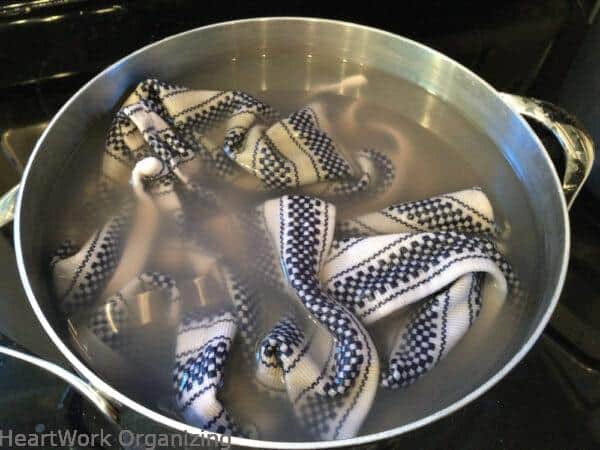 Pretty quickly, the water turned gray and I could tell something was happening. Interestingly, heat seems to be a real factor here. One pot was hotter, and that was the one with more gray in the water after they both cooled off about four hours later. At this stage, you could still see the dark stains on the towel ends, but they were oddly greenish now. 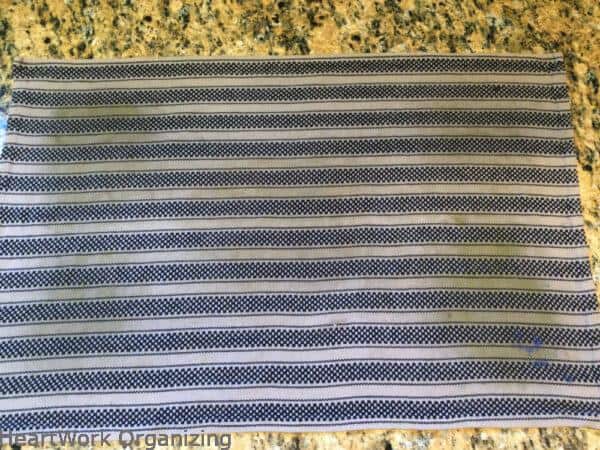 I had to decide…was I going to follow instructions or blaze my own path? You probably know that putting a stain into the dryer sets it forever, so I wasn’t yet ready to throw in the…uh…

OxiClean is one of my go-to stain-fighters. There was enough time for one more round of towel cooking, so I rubbed about a tablespoon of OxiClean onto each towel-end. 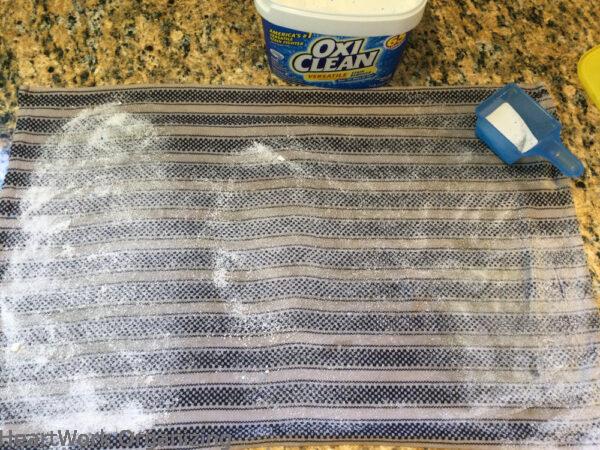 I filled the pots to simmer again, and added the towels once hot.This is what happened. I wouldn’t recommend it. 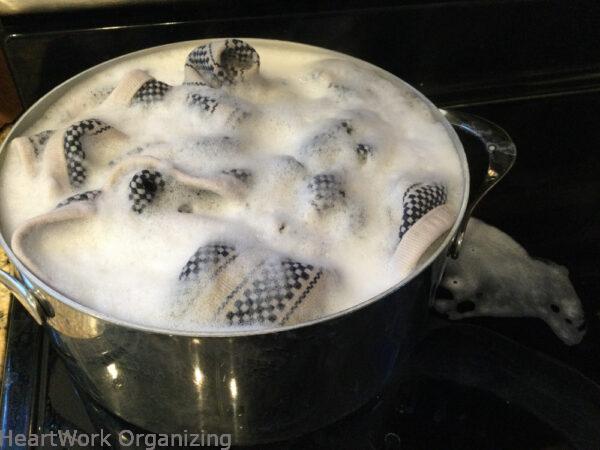 So, yeah, don’t try to oxi your towels on the stove. If you’ll remember from high school chemistry, when you add H2O to the main chemical in OxiClean (hydrogen peroxide or sodium carbonate peroxide), you get a chemical reaction that produces bubbles that agitate the fibers. The bubbles combine with the surfactants in the product to loosen the stains, and the bubbles lift off your stains. In other words…you get a bit of a slow-moving science fair volcano…so do this in your sink, not on the stove. Or skip this step.

This round of towel stripping yielded murky water, but it looked more blue than gray. I suspected that I was pulling the blue dye out of the fibers, so I might end up with faded towels, but I wasn’t sure if it was also reducing or eliminating the stains. 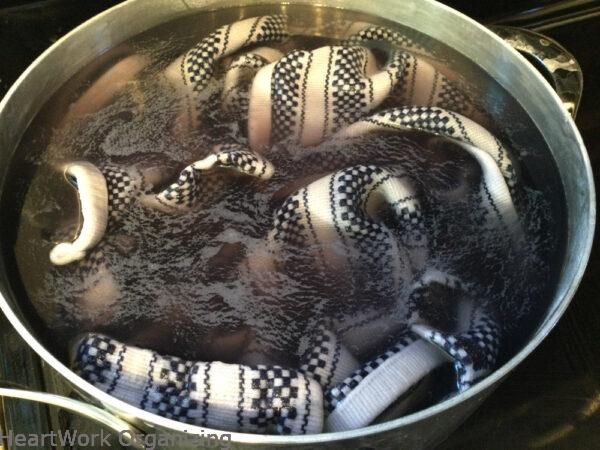 The last two steps of laundry stripping are to run the towels in the washer with no detergent. There’s already enough on board, and the whole point is to get the gunk off. I chose to use a short, hot wash, but did add white vinegar to the softener tray, which not only removes residue, but is supposed to make laundry fluffy. 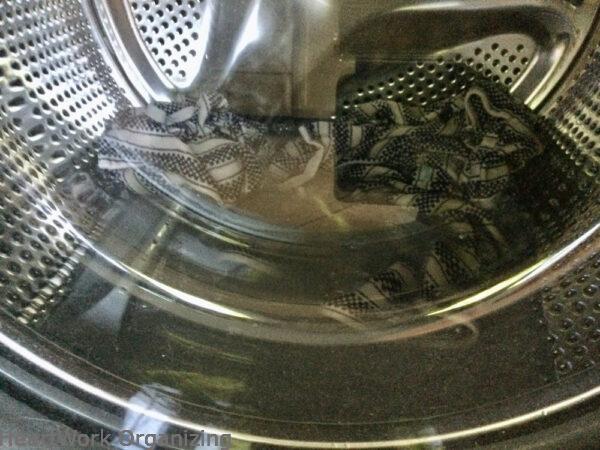 I then followed with a turn in the dryer. I never, ever use the hot wash, so this just felt wrong–and expensive–to me, but after the hot bath my towels just had, I didn’t want poor results just because of this.

Was towel stripping worth it? 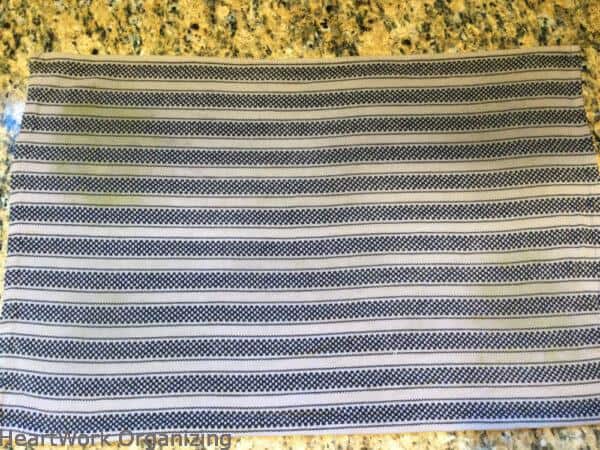 The towels might be a smidge cleaner on the white parts, but that just make the dark stains more visible. They don’t seem more fluffy or absorbent enough to justify the time and energy I spent. Four pots of near-boiling water and the energy it took to get them hot. A separate load of towels in the hot washer and dryer. Several scoops of chemicals. I would have been better off just buying a new batch of towels and retiring these to the rag drawer. We use rags instead of paper towels here. 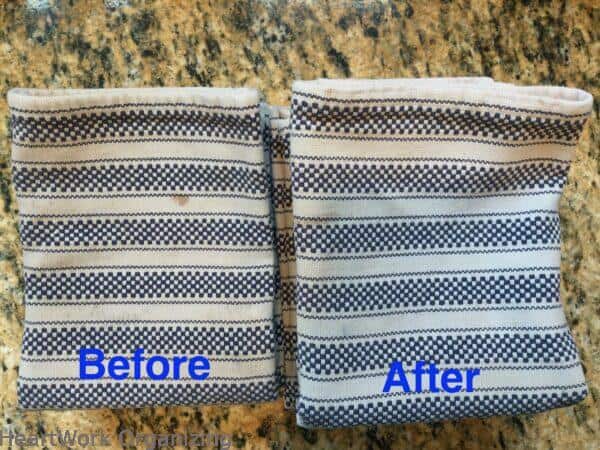 I’d call it a complete waste of time, except that I am able to report back to you and save you from this fool’s errand. 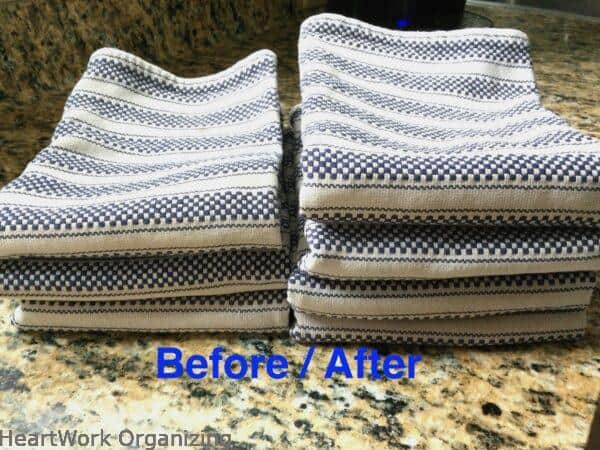 I am, however, going to revisit bluing. I have only used it in the past to make crystals for a science fair, but it’s a very slight dye that counteracts dingy and yellow whites to make them appear brighter. It’s a similar effect from editing your photos cast from more yellow to more blue. Too much and the photo looks really blue, but just a little, and that yellow photo looks bright and clear. Also, going from an incandescent light bulb to a warm LED light gives you a truer impression of colors. This light play is called metamerism, and I’ve showed you what that looks like before. With bluing, you aren’t so much removing stains as you are adding a little blue dye to correct the fabric’s color. Check out this article that recommends an undiluted bluing agent and a pre-mixed laundry bluing product. This article includes the reminder that many of us forget: the sun is a natural bleach, and can remove yellows from clothes in an afternoon!  This trick is a lifesaver with baby clothes. I think everyone should have an outdoor laundry line, but incredibly, they are banned in some areas!

There ya go. One afternoon and 1,100 words later, I give you permission to skip the laundry stripping trend.

Organizing Photos: How to Make a Photo Book

15 Hidden Storage Spaces in Your Home

Where is Your Will? 5 Things to Know about Last Wills