I’m not a fan of New Year’s resolutions, but I’m starting to re-think my aversion to them thanks, in part, to my pre-teen daughter. Whether you are trying to get organized or reach some other self-improvement goal in 2020, consider taking up a resolution, even if you don’t like them. 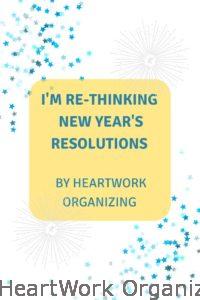 In the past, I’ve just felt too much pressure. There were too many things for me to work on. Should I focus on one goal single-mindedly, or should I improve 100 things by just one percent each? Would making a goal on this one day really change my life in the long run? How would I track my progress? And worst of all, what if I fail? Stats show that 80% of resolutions fail, and most people completely give up their shiny New Year’s resolutions by January 12!

There’s an invitation to attend a live FB event I’m running today to get you encouraged to work on your organizing projects. Due to a systems glitch, this email is going out just when the event will be starting, but don’t fret. You can listen to the replay inside our Clutter-Free Facebook Group anytime. Keep reading!

The average pre-teen isn’t really known for making wise choices, being motivated in the direction of self-improvement, or sticking to anything long-term, unless we’re talking about striving for the next level at gaming. So when my decidedly non-athletic pre-teen daughter asked for a FitBit for Christmas, I thought for sure this device would find it’s way to the bottom of some drawer in no time. I mean, what was she up to?

But social pressure, deadlines and trackable measurements are powerful tools…even when you are twelve and don’t know the names of said psychological phenomenon. So I was shocked–SHOCKED–when both daughters not only exclaimed glee at their presents but immediately put them to use tracking their steps. Of course, they started competing for the most steps. One daughter, in particular, looked for inventive ways to “cheat” the system. It turns out that actively playing with the cat gave her steps. Chasing her sister around the house gave her steps. Aggressively stirring dinner on the stove gave her steps. And shockingly, walking around the neighborhood gave her steps! Who knew! And even though she thinks she’s cheating the system, our cat loves the extra attention, I appreciate the extra help with dinner, and she is, in fact, more active despite herself.

Our introvert, couch-potato daughter was still saying no to going on family walks, but when we gently reminded her that the FitBit would add steps, she literally bounded for her coat and shoes!

She technically hadn’t made any sort of a resolution, but it sure would look like it to an outside observer. She still hasn’t made it to the recommended 10,000 steps a day, but she does keep trying.

I’ve been thinking about a New Year’s resolution of my own for over a year. I’d like to easily do the splits again before my next birthday. I used to be able to drop to the ground with legs splayed front to back at right angles to my body without a thought. In the process of adulting,  I’ve opted for chairs over the floor too many times. Although I’m still hyper-flexible, contributing to my needing bunion surgery several years ago, I stop about six inches from the floor these days…and I can’t say it’s all that comfortable. So I’m going to yoga a little more often, leaning a little further into all sorts of stretches, and considering hiring a coach to help me get to a comfortable full split in the next few months. I haven’t told anyone this before. Now just the thousands of you who read this blog are in on my silly little goal that I happen to be declaring on New Year’s Day.

If you are re-thinking your resolution to get more organized this year, I invite you to join us today, 1/1/2020, at 2 pm eastern in our Clutter-Free Facebook group for a 20-minute refresher on the SORT and Succeed system and how it can jump-start your resolution. It’s just five simple steps to organize anything, and it could be the difference between landing on the moon, landing amongst the stars, and staying stuck on the couch.

This LIVE event will be run through our Clutter-free facebook group (over 1,000 members strong!)

If you are already a group member, just click here at 2 pm (US eastern) to listen and post comments.

If you aren’t yet a member, it’s free, so click to request to join. There’s nothing to lose but your clutter.

If you miss the live event, click and watch the replay anytime. 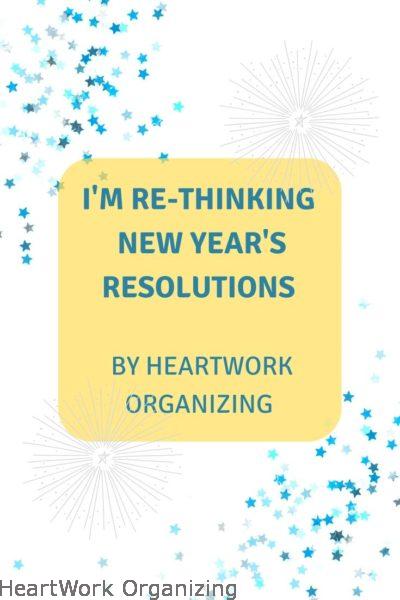 What NOT to Buy to Get Organized

3 Things I Do to Simplify my Household

Best Ways to Clean the Dirtiest Areas in Your Home