Organizing time is a skill every single one of us can use help on, me included. You’ve probably heard me say before that keeping a planner calendar is one of the most important things we can do to stay on track. But what’s so magical about a planner, and why do I think some tasks belong on the calendar, and not just on your To-Do list? 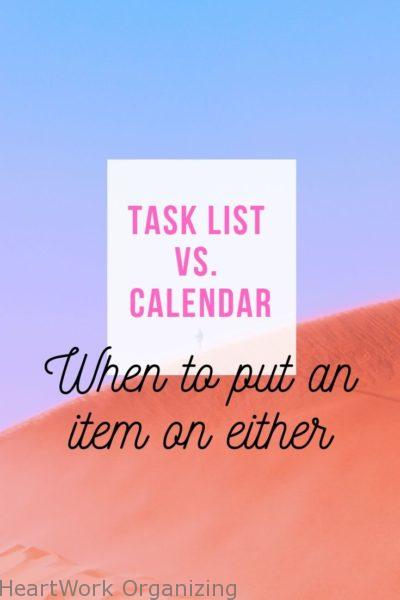 A calendar only tells you what day it is or was, but a planner helps you spend the day on things you really mean to be doing, which are usually important tasks or important time with loved ones.

If your calendar is mostly blank, then you’ve probably only captured a few appointments that OTHER PEOPLE have committed you to. Do you feel like these few written appointments on a mostly blank calendar don’t actually tell you how to get through your To-Do list? You’d be right, but you can change that.

If you are like most people, your To-Do list is a mile long, or at least longer than you’d like it to be. And many of your To-Do items aren’t necessarily simple, one-step tasks. So you’ll benefit by breaking down projects into tasks, and tasks down further into manageable chunks that you can schedule on your planner.

That’s right…you can schedule appointments on your calendar WITH YOURSELF! Right now I have a little task to call 8 people from a club I’m in, to check in with them. That little task could easily slide to the bottom of my To-Do list. It should be done during the day, when I have the best chance of reaching people, but I’ll probably get sidetracked and leave it to the evening, and then I’ll be too tired, or have a lower chance of actually reaching these folks. So, I scheduled this task into my calendar for tomorrow at 10 am.

By looking at my planner, I know that I can’t actually schedule anything else into my 10 am “time container” once I schedule that . It’s already full! If I think I should actually be able to make 8 calls in one hour, this is a reasonable time slot for this task, although I might schedule my next task at 11:30, just to give myself a little chat buffer.

[bctt tweet=”That’s right…you can schedule appointments on your calendar WITH YOURSELF! #Productivity #Organize” username=”DarlaDeMorrow”]

This works great for any kind of task that doesn’t normally come with a deadline. If you’d like to write more, for instance, but never seem to have time to write, then schedule that “writing appointment” on your planner in advance. If you’ve been 100% unsuccessful in hitting your goal up until now, by just creating that appointment with yourself, you give yourself at least a fifty-fifty chance, or more of actually completing that task!

When those appointments with yourself roll around on your calendar, you could blow them off, but it’s likely that you won’t. You’ll be much more likely to complete those tasks, or small projects. Getting something done on your goal is better than getting nothing done, right?

But if something truly more important does come up, you can always reschedule them instead of ignoring them altogether.

So when does a task belong on your calendar and not just on your To-Do list?

This might be a new idea…making appointments with yourself. Pin for later.

THE One Question That Will Help You Organize Your Photos