This weekend we had another wet, windy winter storm, and there are plenty of people wishing they’d taken the time to organize their garage back in the fall. This family did just that. Garage organizing might seem like a huge project, but it’s well worth it, when you consider that this is the main entrance to your house, and you might be going in and out of your house several times each day. This is the last general storage area many families organize, and it’s the last storage area organizing project I’ll feature before we move on to bedrooms and closets tomorrow.

Here is the garage before we started. 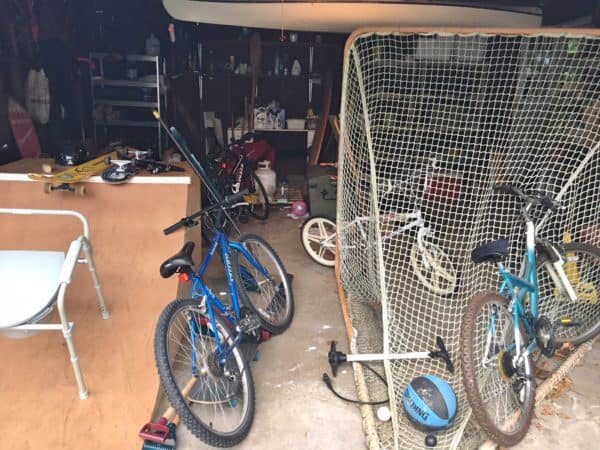 Yes, there really was a boat. Two of them, in fact. Plus three surf boards, twelve bikes, eight skateboards, seven bike helmets, three snowboards, and two sleds. And a skateboard ramp and a lacrosse net. You get the feeling this family doesn’t sit around much. 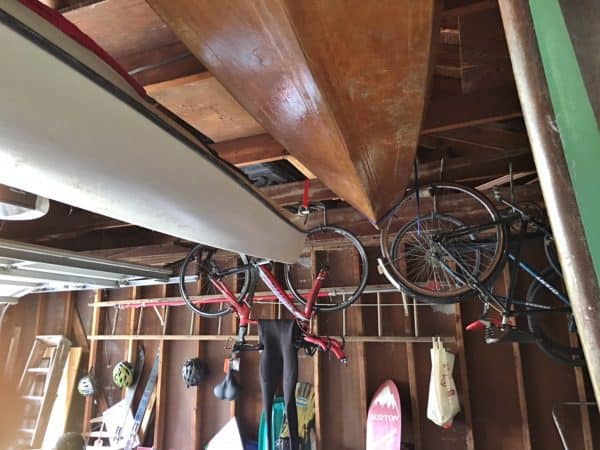 Using SORT and SUCCEED, we agreed to focus on the garage, even though it would have been easy to get distracted with the attached sunroom and laundry rooms that also had some sports gear. Getting started was a bit challenging because it was raining and more rain was predicted,  but we carried on, rain or no rain. By the end of day one, it had actually cleared up, and turned into the perfect day for organizing. By the end of the day, you see the skate ramp up and out of the way, but not easy to pull out. Keep reading to see how this job ended up. Also, you see the sticky notes on the shelves and bins. That’s ok for a few days, but it’s not going to help anyone stay organized. 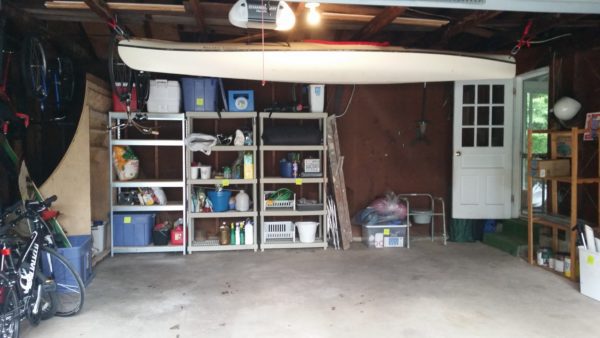 Moral of the story: Don’t let the weatherman determine your organizing plans. He is so often wrong, and you could get so much so much done while waiting for him to be right!

Step 2 of SORT and Succeed, organizing into groups, meant going through each pile and each item, mostly with the help of the homeowners. They were great, and had no problem throwing out the obvious trash. Meanwhile, we sorted into groups that we usually find in a garage:

Step 3, reduce, release, reset, started with finding a new home for the huge lacrosse goal. A neighbor wanted the goal for their kid, so passing it on was a cinch.

We did a happy dance when we found this huge pegboard in the back of the garage. And then we found a pack of brand new pegs! It takes so little to make my team happy. We actually spent about an hour setting the pegboard, using as much space as we could, all the way to the tippy-top. The right side of the wall was for small tools. The left side was designated for bike parts and tools. 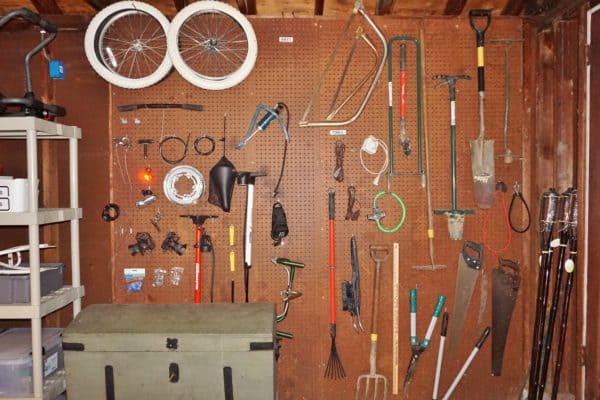 We also re-hung the Gladiator tool rails that the homeowner already owned. I figured out part of the reason they didn’t work so well was that the tools were in contention with the dryer pipe. By rehanging that tool strip a few inches higher, everything hangs neat and straight. 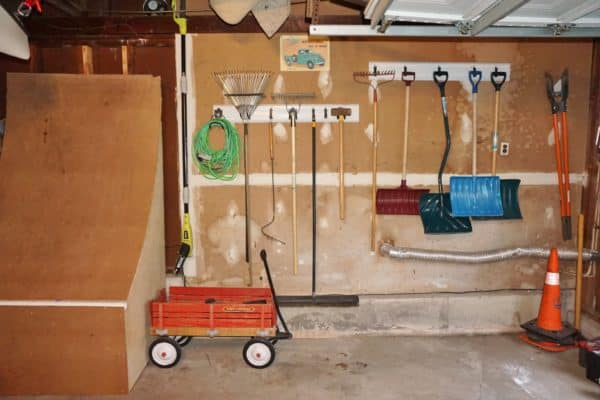 A few well-chosen bins kitted out the three remaining shelving units. A combination of open bins and bins with watertight lids provide the perfect combination of ease-of-access and long-term storage. 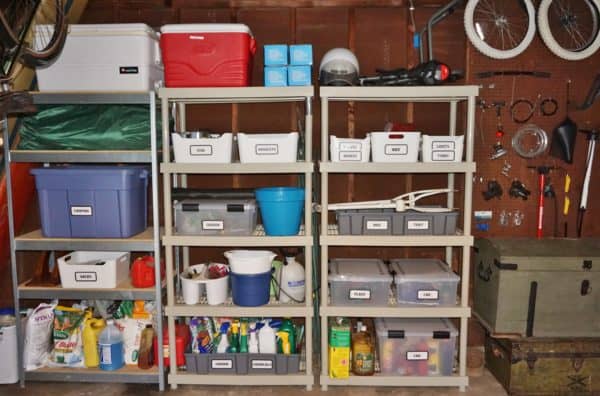 The sports wall proved somewhat challenging. My new favorite item, skateboard racks, were super easy to install on exposed studs, and even made the unfinished wall look more attractive. 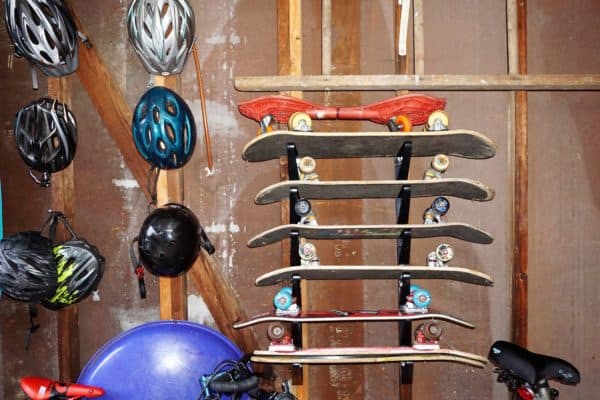 We liked them so much, I bought a couple more skateboard racks to mount the remaining snowboards. The also work for those awful Razor scooters and other sports gear. 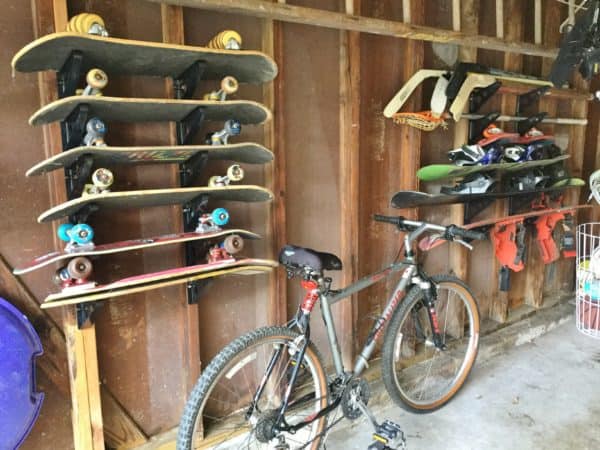 An open-wire basket is my favorite tool for holding sports balls. It’s fairly durable, and super easy to find the ball you need, even if it’s at the bottom of the bin. You can’t do that with a regular garbage pail. A regular plastic bucket is better for lacrosse sticks, bats, and golf clubs. 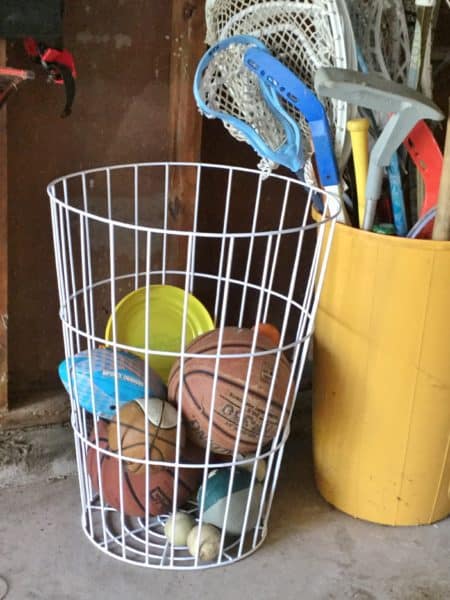 Even with all this organizing, there remained a total of nine bikes in this space. I asked the family to purchase some bike lifts, like the bike hoist I show you in this video. Because of their rafter situation, it’s going to take just a bit more work to get all the bikes mounted and overhead. Even so, the bikes that are still on the floor are much easier to work around. Unfortunately, they don’t all have kickstands, or they could be parked in their own lanes in the garage instead of up against the walls. If you have an unruly bike in the garage, and you don’t race competitively, I’d highly recommend installing a kickstand, so your bike will stay where you put it. I get it if you hate kickstands, I really do, so I went looking for a better one, and recommended this quick release kickstand to my client. Ideally I’d still like to get a few more things off the floor, but the big picture is that the kids can actually get to everything AND put things back easily. That’s half the battle. 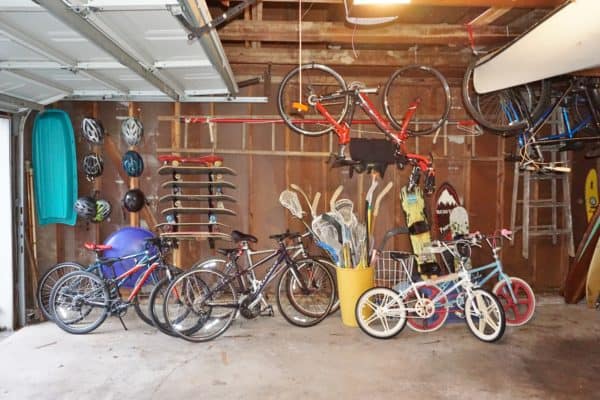 They also might paint the garage. Then again, they might not. Because…LOOK! There’s something they haven’t seen in a while! I begged her to pull in as soon as we finished day one and had enough room for the van. I live close enough to this client to know that she still, all these months later, is parking in the garage. And I’m sure she’s loving it on a weekend like this! 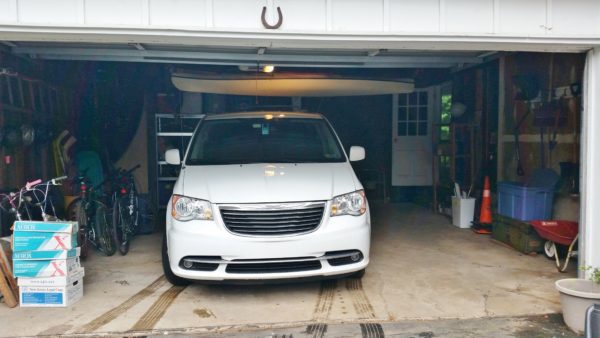 Mom and I just hung out in the garage at the end of the day, just because it was such a pleasant space. Can you say that about your garage? If not, I’m up for the challenge of getting your garage organized. We’ll schedule for weeks or months ahead, if you aren’t ready yet, but want to be ready before bad weather hits again.  Contact me to get our team out to your garage. 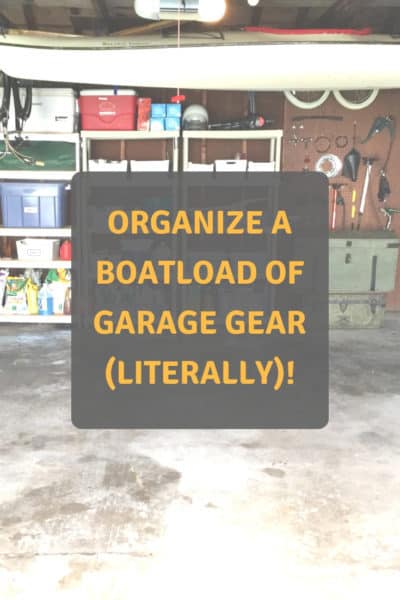 The Power of Yet

“Use What You Have” Organizing