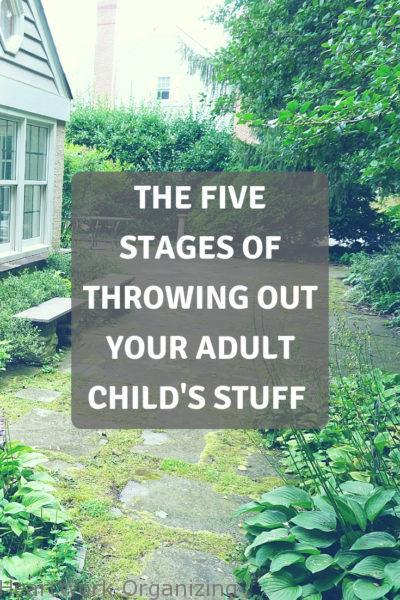 Many people leave behind childhood possessions at mom and dad’s place. I’ve seen parents go through these five stages of keeping and later throwing out their adult child’s stuff: denial, guilt, bargaining, depression and acceptance. This applies both to the things that your child made or used when they were younger, as well as to the stuff that you think should go to them someday, like family treasures and your old furniture.

This is a clear and unambiguous reference to Elizabeth Kubler Ross’s work on the five stages of grief. The process of separating from our things can feel similar to losing someone close to us. If you need more help, please visit Grief.com. This article is not intended to be medical advice.

Stage One of Organizing Your Kid’s Stuff: Denial

I’m not really storing it for her. It’s still in her room. It’s still her stuff. I know she still wants these old socks/records/toys/speakers the size of a VW bug/pinch pot clay ashtrays. She doesn’t have room to keep it where she’s living now. It’s not a lot of stuff, anyway. I don’t mind.

I could never throw his stuff out. I’d be the worst parent ever. He’ll blame me for getting rid of his valuable baseball cards/books/lunch box/army men. He will definitely want it when he has kids of his own.

She’ll need it when she gets her own house. She doesn’t have the money to replace this stuff. They don’t make good stuff like they used to; she’s only used to having cheap, Ikea items. I’ve heard you can make a lot of money selling stuff online, even though I have no idea how, and they have no interest in selling it for me. Maybe if I gather it all together and tell her she can keep the money, she will follow through on selling some old stuff. I plan to talk to her about it the next time she visits/the next holiday. Well, maybe not the next visit, but definitely someday soon…

I don’t know what I’m going to do with all of this stuff. I don’t have enough room for my things, let alone his. If something ever happened to me, who would clear all of this out? My friend just lost her parents, and she ended up bringing most of their belongings to her own house. My own stuff will probably all going to end up in a dumpster. I lose sleep at night thinking about it. It makes me sad that he doesn’t think it’s special like I do. It would cost a lot to crate all of this up and ship it to him. Honestly, I don’t even know what are in those boxes of his. I haven’t looked in them for decades. I’ve already had to throw some of it out because of water damage/mold/insect damage. I’m sure he doesn’t even realize anymore that it’s here.

My kids have been saying that they don’t want these things, and I guess they meant it. Even though he made them. Even though these things are perfectly good. Even though I was happy to have it when I was his age. This needs mending/refinishing/a replacement part/a new cord/cleaning, and I’m not willing to do it. I guess they aren’t, either. This stuff is in my house. I’m responsible for cleaning/moving/storing/disposing of it. I guess it really belongs to me, after all.

Does any of this sound familiar? Have you had your own experience going through these five stages of clearing out your adult child’s stuff?

If you are going through this right now, you might also like to read Things Baby Boomer Say When They Organize Their Home. 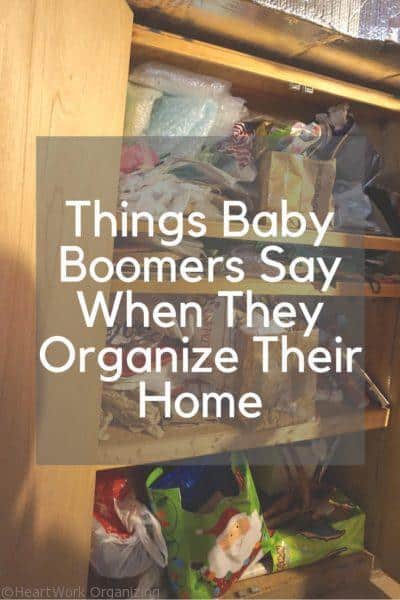 If you need help on figuring out how to rid your home of your adult child’s stuff or downsizing, please contact me.

How to Organize Plastic Bags

Make the Most of Closet Space

Basement Organizing for Toys (In the Stairwell)

Containers Are the Clutter

Student Desk with TIPTOE Legs for a Work At Home Solution