I originally published this article on solving organizing problems in dormers in 2010, but thought you might like to see these storage spaces as you are organizing your own closets at the start of the new year. You’ll find slanted ceilings in many places, including the attic, bedrooms, closets, and that storage space under the stairs. So please forgive the photos. I’ve learned a lot since then. 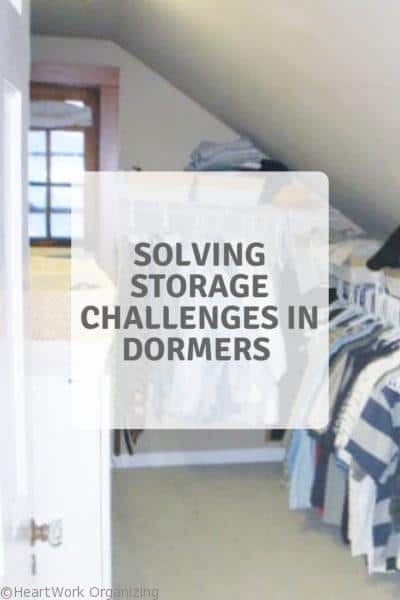 Dormered spaces, or dormers, are those charming areas in homes with slanted walls. They are either an architectural feature or a space and storage challenge. Dormers are commonly found in older homes, especially in attics and top-floor bedrooms, but they are making a comeback in new construction as builders add these cool angles in to more homes. If you are a little person, say under eight years old, they can be magical spaces, outfitted as reading nooks or special forts, but for the rest of us, dormers might just be lost real estate.

Closets in dormers are the worst, but you can get the most out of dormers with these hacks. Determine where the bulk of the usable space is first. Is the longest run at or above 45″ from the floor on the sloping wall? Or is it on a flat wall that meets the slanted wall?

Compare all the walls, and the ways that you might run your storage. Look for the longest run that falls between the height of 45″ and 60″ from the floor to maximize your comfort level and the space for hanging items.

You might be surprised to find, as we did in a recent closet redesign, that could we have just as much hanging space on the wall that was easiest to access. We also squeezed shelving space on the flat wall in the triangle above. And as a bonus, we were able to install a second hanging rod on the opposing wall, effectively doubling the size of the closet. This configuration came with a bonus. Because we were no longer blocking off the dormer space with a wall-to-wall hanging rod and clothes, we now could use the very back of the sloped closet for out-of-season storage that was much easier to access, without having to remove things from a hanging rod. 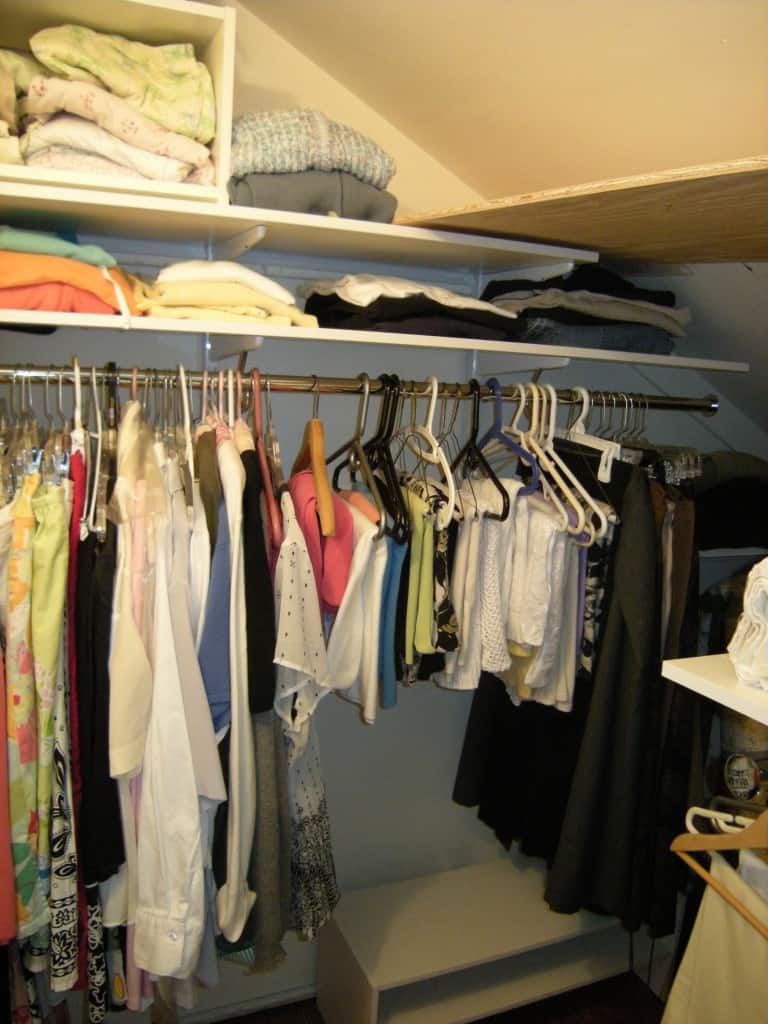 In another closet we organized, the entire length of the closet was a hanging rod and shallow shelf that was installed right up against the slanted wall/ceiling, making the shelf completely useless. We re-installed the same closet hardware about 18″ away from the slanted wall, allowing us to literally raise the bar just a bit to make sure everything had enough space to hang without hitting the floor. Now we could fully utilize the shelving above, with the help of some baskets which sat on the shelf and acted like drawers.

You don’t need a geometry course to see that there is more space at the big end of a triangle than at the pointy tip.  By moving the rod forward into the room a bit, we created some additional space behind, allowing for easy access to off-season wardrobe storage. It’s not much, but 12-18″ is enough to store an entire season of folded shirts, stacked shorts and shoes. 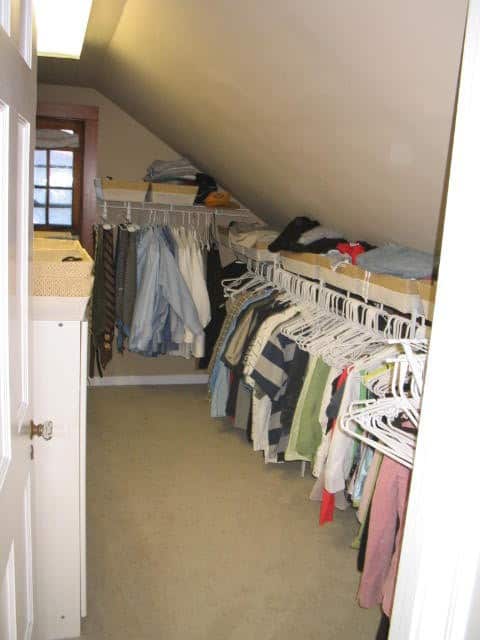 Do you need to put the hanging rod on a slanted ceiling? How the heck to you do that? If it’s a narrow space, you might be able to go wall-t0-wall with end-caps, like I have here in my coat closet. 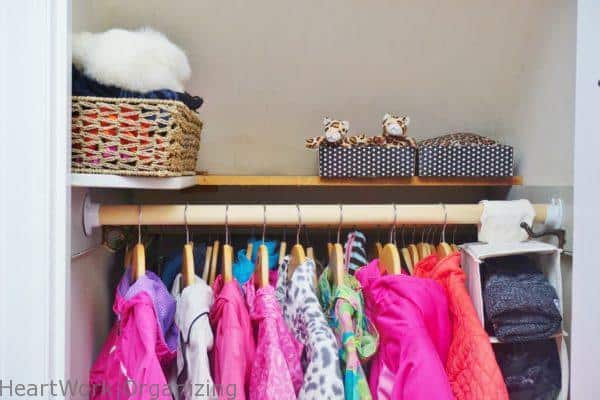 But if it’s longer than 24″, you’ll want some brackets mounted to the wall for support. Standard brackets won’t install properly, but there are cool brackets that are specially made to hand on a slanted wall and adjust to the angle you need.  You can find sloped ceiling clothes rod brackets here.

Another way to deal with slanted walls and dormers is to make them work as storage. An upright wall that meets a low slanted ceiling is called a knee wall. A knee wall creates vacant spaces behind it. Some people use these spaces as very short closets with doors, but since spaces behind the walls are unfinished and unconditioned, they are too hot and too cold. If you already have knee walls built in, consider recessing an existing dresser. By cutting out an opening, inserting a dresser, and finishing the front with decorative molding, you have an inexpensive and very functional solution. Just be sure to measure the space at both the front on the knee wall AND the back at the depth of the dresser to ensure there is enough space to accommodate it. 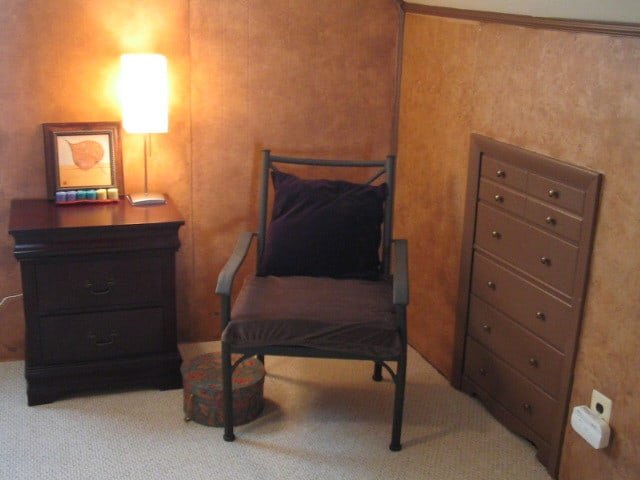 If you have a living space with a dormer, your furniture placement can be tricky, but chairs under dormers can work very well. You don’t need much headroom to raise and lower yourself. The client with the room below thought that the slanted ceiling under his stairs could only hold his TV. However, when we put the furniture in place, we could get the most seating in the room by bringing a recliner under the dormer, out of the room’s traffic pattern. 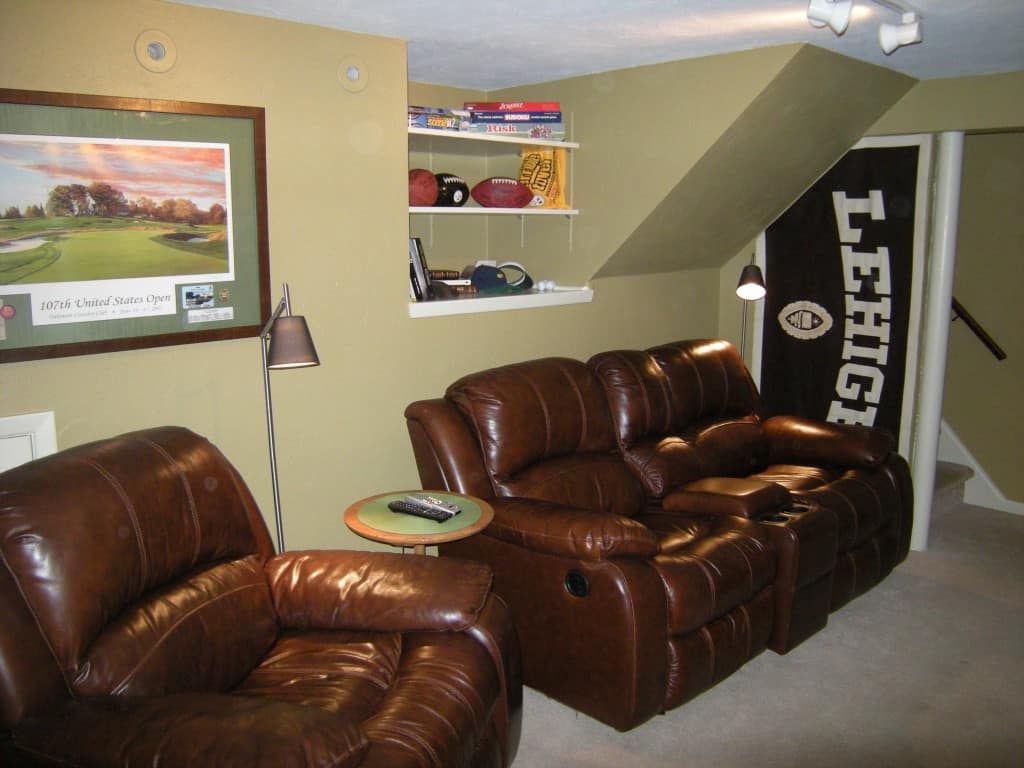 If have a dormer but aren’t loving the many different angles, use a designer trick and paint the walls and ceiling the same color. By painting the ceiling and the walls all the same color, you minimize the number of transitions that the eye has to process, instantly calming the space and making it look bigger.

You might remember this bedroom in Milo’s house that we staged. Once all walls were painted one color, the whole room looked huge, like a master bedroom, and not an attic. But if the color were to stop at the wall, the whole room would basically end at the headboard. 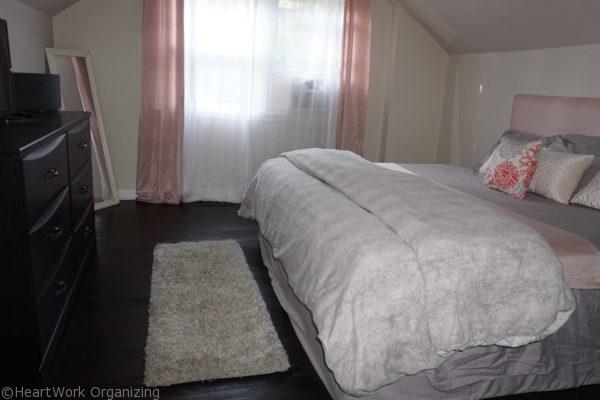 Whatever your dormer challenges, you probably can turn that dormer into great storage or living space.

How about it. Does this post on dormer storage give you some ideas for your problem storage spaces?