Storage spaces like basements can be downright overwhelming to get organized. If it’s just a storage room in a basement, then it’s not supposed to be pretty, right? And there’s no way to avoid organizing that same basement over and over because there’s no way to keep it organized, right? Actually, I’ll fight you on all points. If you lay out a storage plan well, you don’t have to keep fighting clutter, and your basement can be a thing of beauty.

This client just moved into a new house a little over a year ago. Her house looks amazing with all the work she’s put into it, but this huge storage space is where all the odds and ends go. We worked on this just after Christmas, which is a great time to pick through the ornaments and decorations you didn’t use this year, and part with them rather than storing clutter. 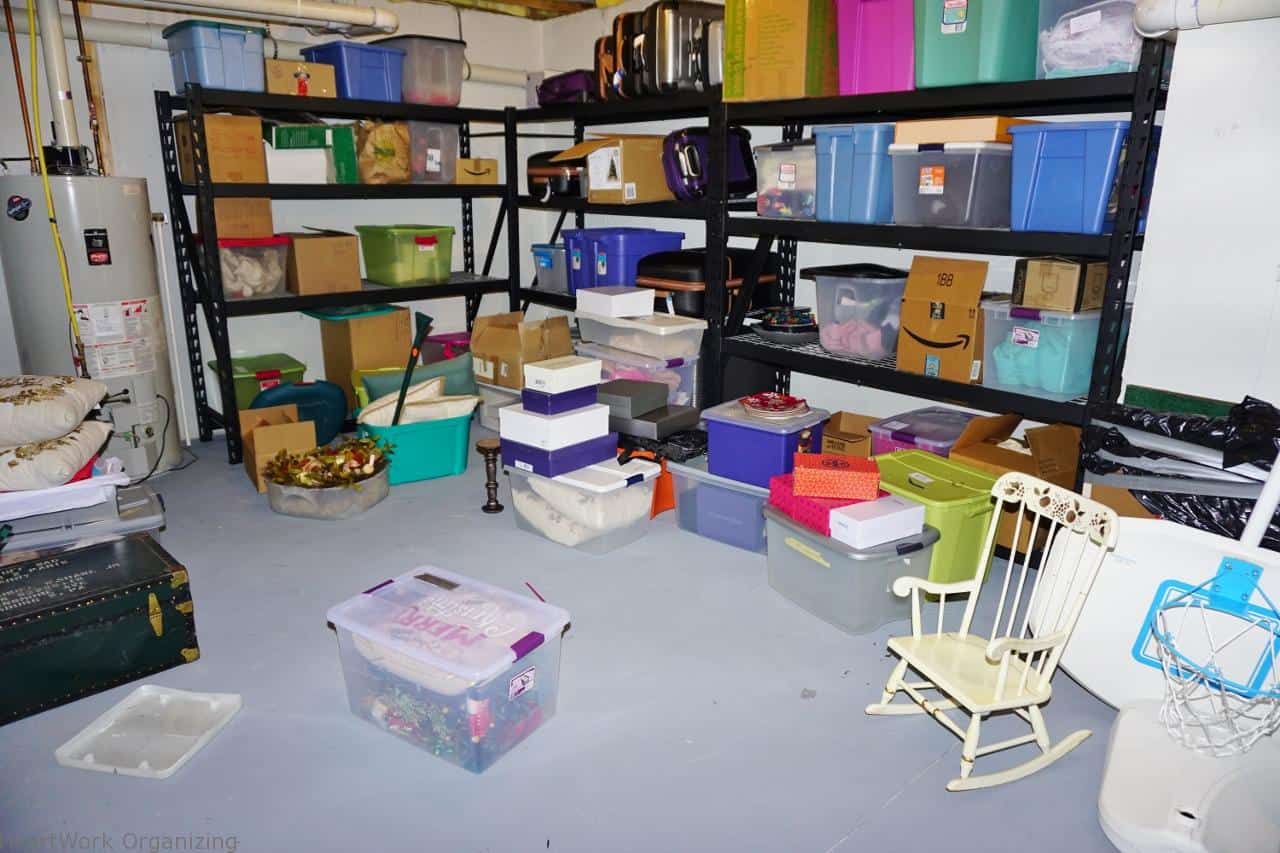 Be honest. If this looks like your storage room, you probably tend to just dump and run, right? Me and my crew? We want to dig right in. It’s hard to believe, but we see this room, and we can’t WAIT to make it better. A LOT better.

As always, we start with the five steps of the SORT and Succeed system. We had already written down our goals by email.  We started on the lower left shelf, working left to right, bottom to top, and sorted the stuff into rows of like items laid out on the basement floor. I didn’t take pictures while we were working, but it was clear that the largest group was going to be the Christmas decorations. Looking at the bins on hand, I decided to try to use all the green and green-ish bins for Christmas. This meant unpacking and re-packing about half of the bins, but it was going to be important in the long run to have a color-based storage system. 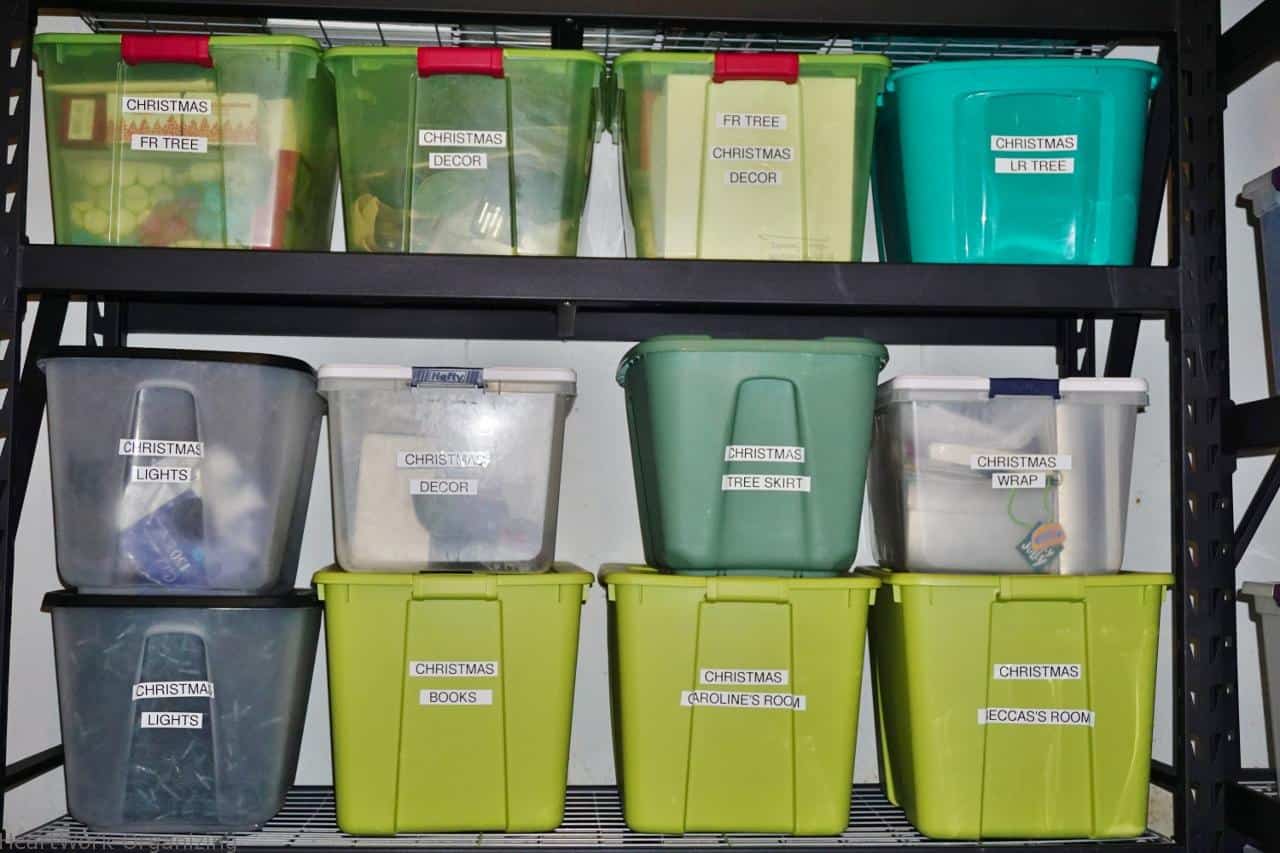 One whole section of the shelves ended up being Christmas, which was perfectly fine! Next, we grouped all of the luggage together on two shelves. Even though they are large, suitcases are very light when empty. 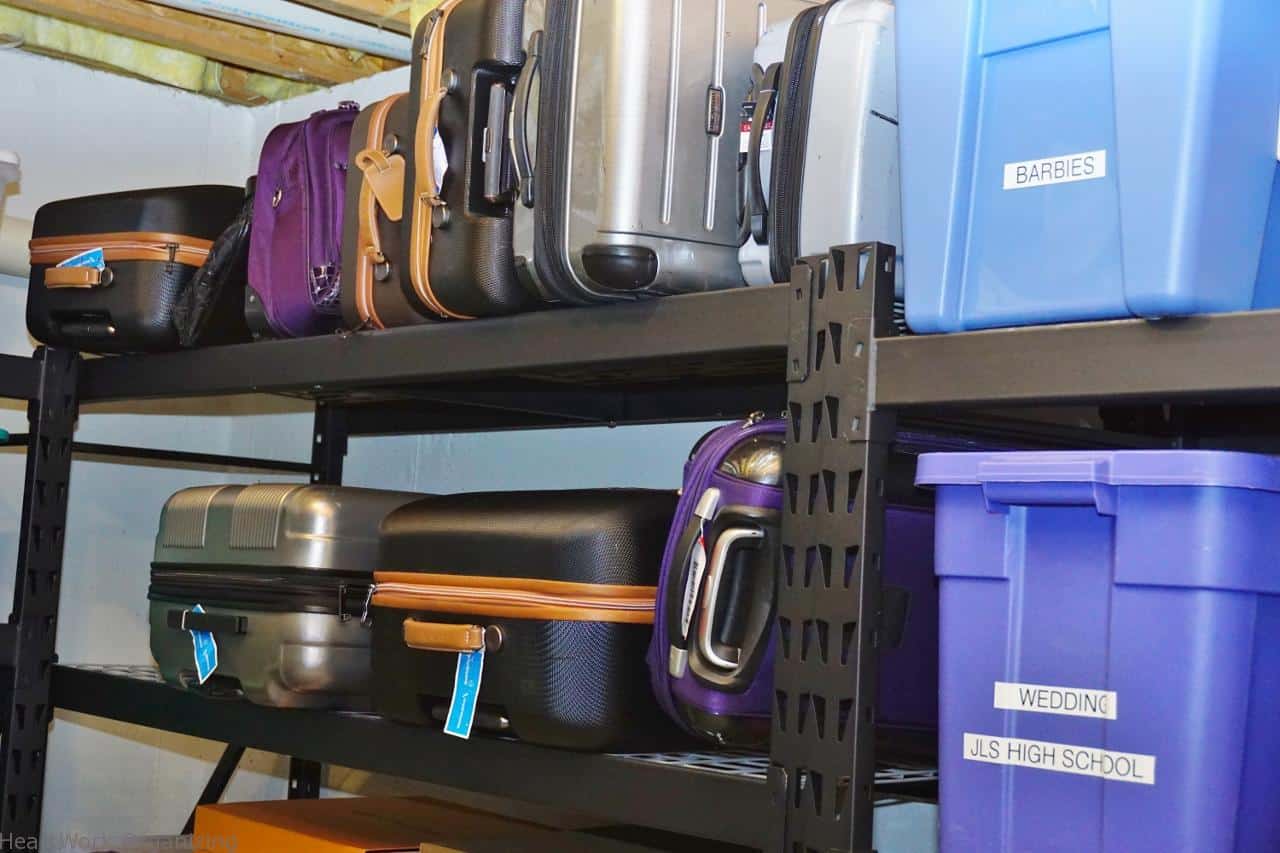 Under that, we had enough room for out of season clothing, including boots. Even better, we had two empty bins in our final design. That’s when you know it’s a good organizing system; it’s not chock full before you’ve even started. Empty boxes, empty drawers or empty shelves are a good thing. That means the next bunch that comes into the basement has somewhere to go other than on the floor. 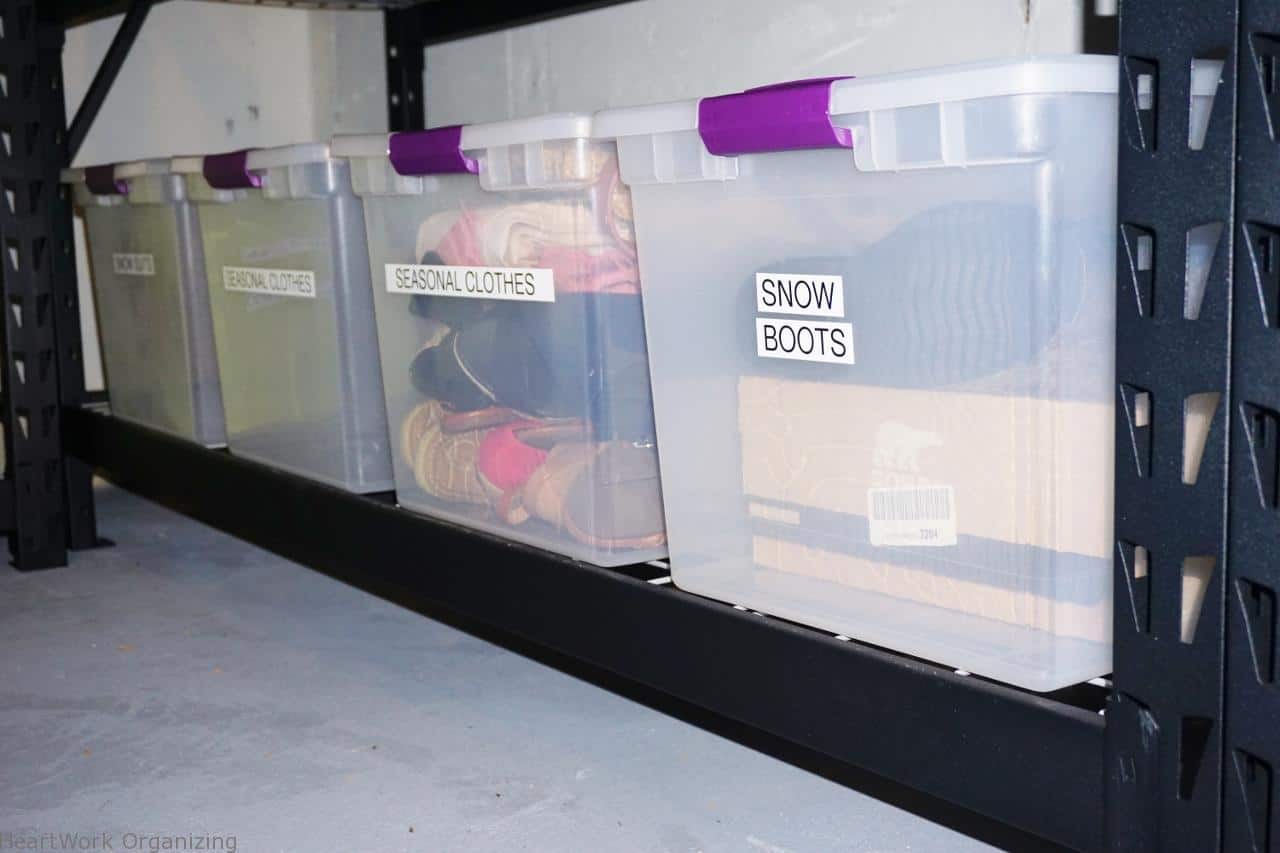 The real key to organizing basement shelves is to create a system that you can follow each time you pull out bins and decorations, and each time you put them back. We decided how to use the different bins for each section, and we consulted with the client to decide what categories should go where, with higher-use items at easy-reach levels: 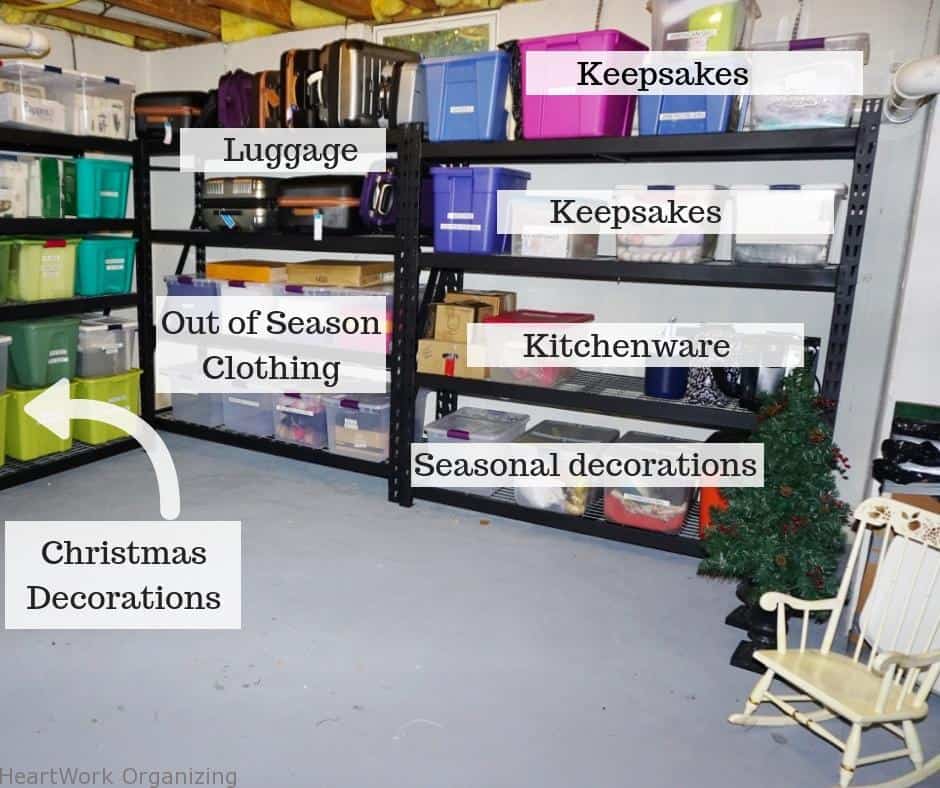 The client is all about keeping what sparks joy and getting rid of everything else, so we had a really healthy pile for the donation drop-off. We really enjoyed getting the cardboard out of the mix, because it’s not sturdy over time, and it looks kind of junky on shelves. We loved putting large, 1″ labels on each of the bins, which you can see from across the room.

Probably the most important idea we had for these shelves was to adjust the shelf on the middle left. See how we neatly got two Christmas bins on the bottom row? That wasn’t just luck. If we had left it as it was, it would have only held one bin. But 10 minutes of wrestling with a shelf that needs to move 3 inches is going to mean a lifetime of organizing satisfaction, now that all the bins fit.

We talked about it, and the client said that she maybe could have done this on her own, but it would have taken her all day, and there’s no way it would have been this pretty or maintainable. 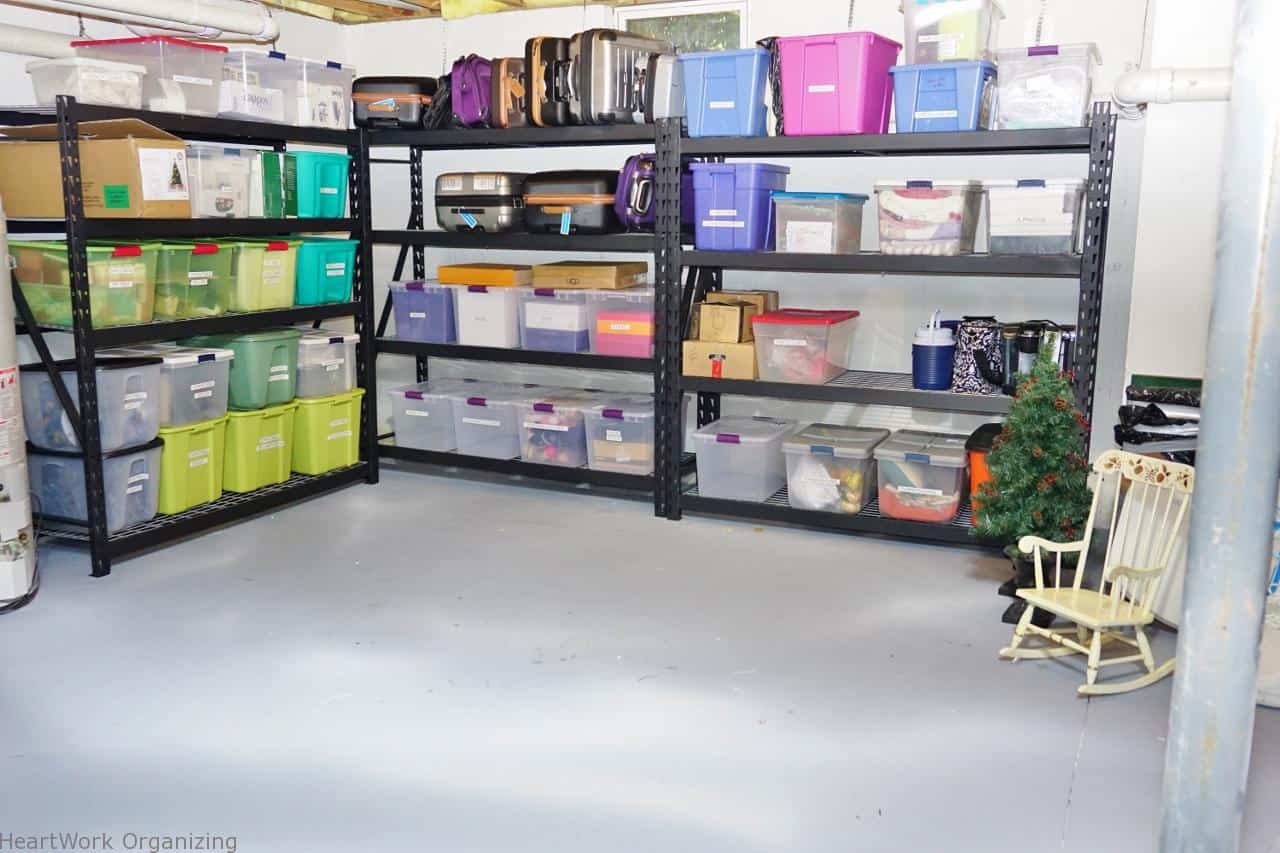 There was one more shelf on the side that was part of the basement ideas for today. Nominally it’s “his” shelf, but we couldn’t just leave it. It was a crucial part of getting boxes off the floor so you could walk around the storage room. Yes, there’s plenty of cardboard here. But now that it’s only his stuff, perhaps he’ll be motivated to organize and maybe downsize some of the books and papers stored here. 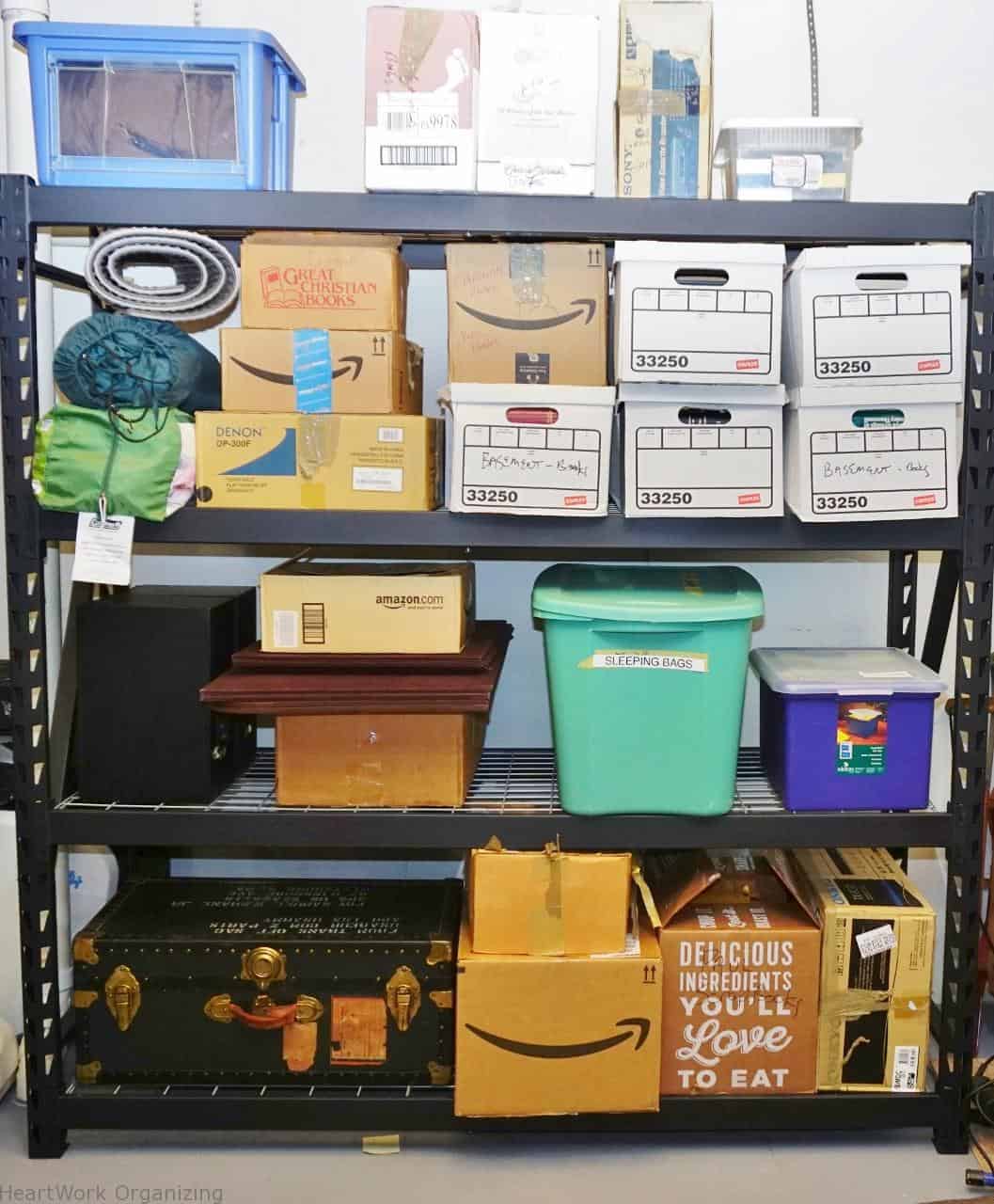 There were a few other pieces to this project, but mostly we’ll just celebrate (step 5 of SORT and Succeed) by basking in the feeling that those lovely organized shelves produce for a moment. 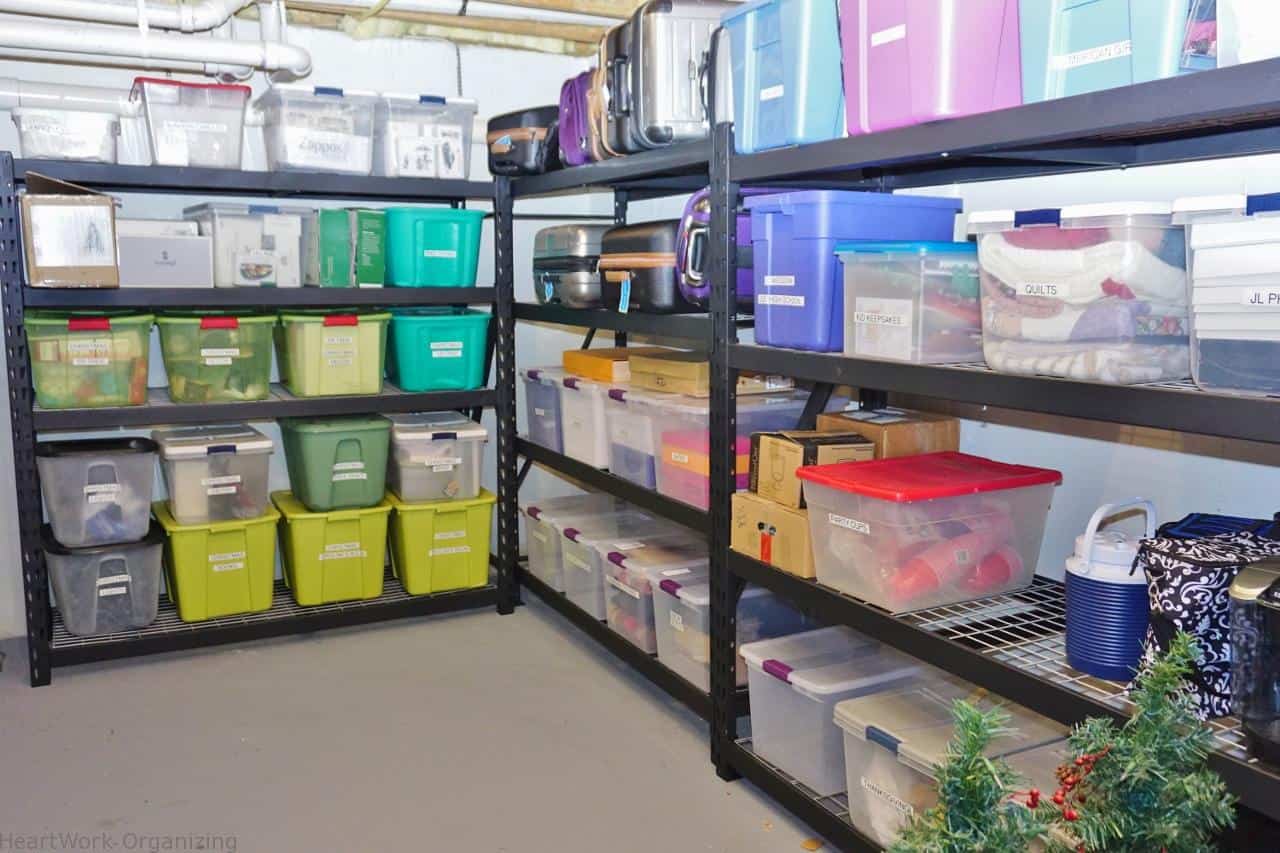 OK, that’s your inspiration for today. Do you have some basement shelves you’d like to go organize now? 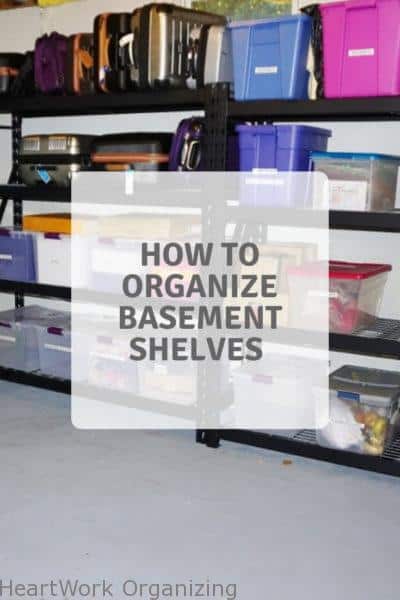 How To Recycle Metal: A Tale Of Woe