Ah, Paris…missing you always. And I’m not the only one. My (Part-Time) Paris Life by Lisa Anselmo is testament to another soul who is nearly always missing Paris.

Anselmo’s book is in the memoir category, which is not a genre that I am drawn to, but I drank in this book over just two short days, which is not, by the way, how anyone should experience Paris.

In fact, my first trip to Paris took just one day, a side-trip shoe-horned into a longer trip through Germany.

If that’s all you can manage, do it anyway, even though everyone will tell you that you can’t do Paris in a day or two!

You probably have been infected by the same love that Anselmo and I both have for Paris.

The knowledge that the light is somehow better, the sky bluer in Paris. (There must be a scientific explanation having to do with longitude, latitude, altitude, but I don’t really care.)

The craving for fresh food. Really fresh. In the middle of the city!

The comfortable sense that there is balance in an ancient city with modern flair.

Yes, I am plain old jealous of Anselmo and her petit but mignion (cute) flat that she renovated. Walking around NYC with a key in your pocket for your Paris pied-à-terre changes your view on everything. I know, I know,  Philly and Jersey people are supposed to be Shore people, but, I’ll take the Paris Plages over the Parkway any day!

Anselmo’s book, though, isn’t just about Paris. We share a familiar thread with origins in a Buffalo, NY Italian-American family, and relationship patterns that are very familiar to many. The martyr-mother figure. The idea that you ought to just be grateful for what you have. The inherited soundtrack of, “Who do you think you are?” And the sadness, paralyzation and sense of overwhelm that comes with clearing out the house after a parent passes.

For a moment I lapsed from my Parisian dreams into my regular professional organizer’s life when Anselmo describes her visit to her French friend’s chateau attic, chock full of stuff, where she wonders, “Did the family realize what they had up there? Or was it just so much old junk to a family with an institutional memory that spanned several generations?” She mentally compares the French attic treasures to the family heirlooms that she’s still paying rent to store in a New Jersey storage locker.

None of it worth much, monetarily speaking, but that’s not the point of saving a possession in an attic. It’s there because you’re not ready to part with it for whatever reason. The attic is a kind of purgatory for your past – still part of your story, hidden away but very much present….I’ve never been able to separate stuff from life.

That’s what My (Part-Time) Paris Life is about…life. Life across continents. A new life after despair. Life as we imagine. Life among friends.

If you dream of Paris, then you’ll enjoy My (Part-Time) Paris Life. 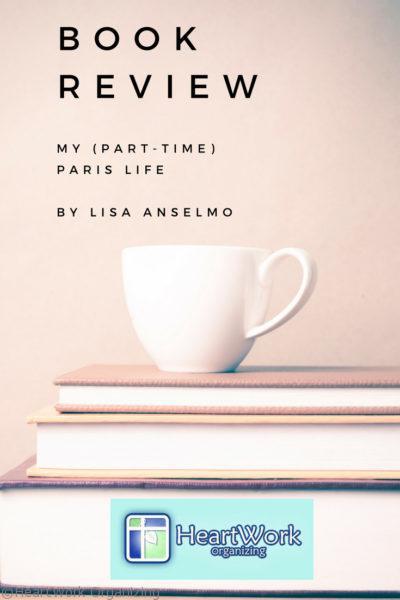 Book Review: The Power of Off by Nancy Colier

Sesame Place is the Christmas Place to Be