If you come to this blog only for pretty pictures of stacked bins and organized closets, you’ll figure out pretty quickly that organizing isn’t all about that, and neither is life. In fact, being organized gives you time to deal with crisis and chaos that happen because you are alive. In other words, stuff happens, and it’s a lot easier to deal with when you are generally organized most of the time. 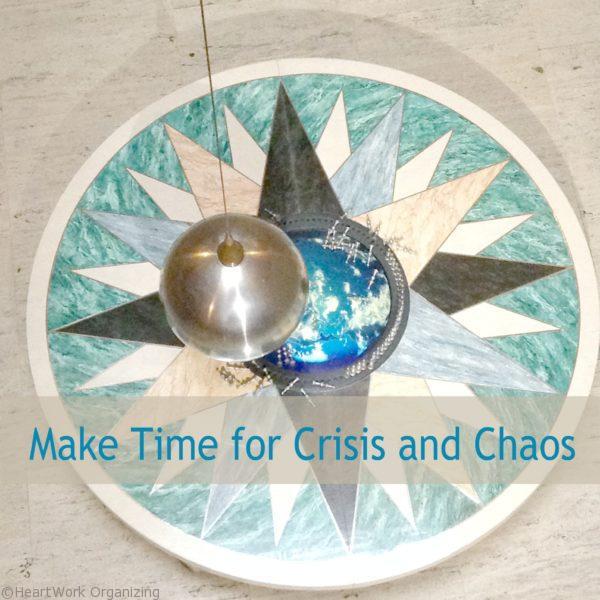 Many of us organized folks are pretty open about the fact that we like to run a tight ship because it’s one of the few areas in life that we actually have control over. There are lots of things in life that just aren’t going to go as planned, or they break into our regular daily routine as crisis. Right this minute, as I write this, these situations are going on in lives of people around me:

Check your Facebook feed, and you’ll see many, many more examples of big and small crisis and chaotic situations like these. Note that not all “crisis” are bad, but even positive events can create unwanted pressure. In so many of these situations, the events are so traumatic because the life of the person who has to deal with them is already packed to the gills! The person “in charge” has no time left for crisis in their day.

We humans are funny. We like new stuff, but we hate change. We crave routine, but we hate to be bored. We like the sense of purpose and rewards of work, but we hate to be tied down. And we like to be organized, but for some reason, we struggle the most against getting organized for the “what if” situations that aren’t really a “what it” at all! Being organized means that you leave time in life for the crisis that come with daily life.

It’s not a matter of if you will need new tires on the car, but when, so it makes sense to put aside money for that expense.

It’s not a matter of if a family member will need your help, it’s a matter of when, so it makes sense to talk with them about how you can help.

It’s not a matter of if you will die, but when, so it makes sense to have a last will and testament in place.

It’s not a matter of if those photographs will get damaged or lost, but when, so it makes sense to back up the ones that matter.

It’s not a matter of if your kids will need white poster board, but when, so it makes sense to have some stored at home.

It’s not a matter of if you will have bad mood/health/hair days, but when, so it makes sense to have a plan to get you through days like this.

It’s not a matter of if your kids will get sick and miss school, but when, so it makes sense to have a few backup options in place.

If your home and life is already disorganized, adding one of these “crisis” events onto an already overwhelming life can spell big trouble. If every day feels like a crisis, when it’s a struggle to get dressed in the morning, you constantly pay bills late because they get lost in all the clutter, no one at your house eats well because meal planning is so random or absent, if you always feel out of shape and physically on edge because you never have time to work out, if this is your daily existence, then one more “real” crisis like the ones above won’t improve things.

If you needed one really good reason to spend the time or money to get organized, it’s this: Life happens.

When life happens, it’s so much less stressful to deal with the crisis and chaos that occur if you start from an organized home base. You can let the house get a little messier than usual, and still find enough underwear for the week. You can give yourself enough grace to let the family eat takeout a few nights in a row until you get back on your feet. You can hand off the daily stuff to your spouse, knowing that he or she kind of knows how things are (mostly) supposed to work around here.

One more thing. When life happens and things do get messy or less organized or missed, it doesn’t mean that you are bad or you have somehow failed. It just means that life happens, and it happens to all of us. So give yourself a break. Give yourself some grace. And give yourself a NAPO professional organizer if it helps. The smartest and most successful people use all their resources and don’t do it all themselves.

[ctt template=”4″ link=”b240s” via=”no” ]The smartest and most successful people use all their resources and do not do it all themselves. [/ctt]

Back to School Organizing for High Acheivers

Three Apps Moms Need (And One They Don’t)

Organizing your Getting Out Of the House Routine {Free Printable}

The Power of Yet