Best intentions every time, but I am not the most productive on a plane. But on a recent long haul flight from New Zealand, I got to be sneaky-productive while watching the movie Hello My Name is Doris. 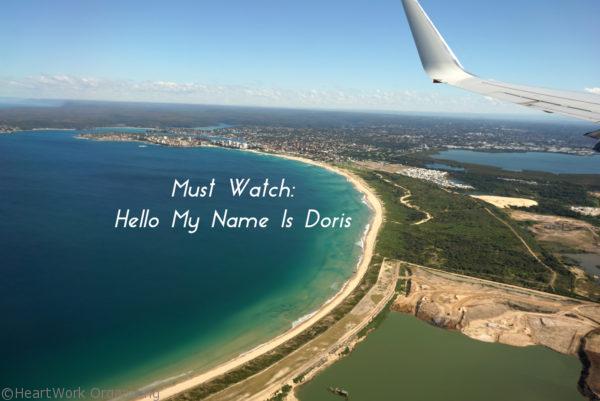 The movie starts with a New York worker-bee in her 60’s attending her mother’s funeral. She lived with her mom right up until the end. At the funeral her brother accosts her to get some help for her mom’s hoarding leftovers (and perhaps her own hoarding behavior), so she can sell their childhood home. I’m happy to say, this isn’t the central point of the movie, just a jumping off point for the lovable Sally Field to do her thing, show us a strong, sassy woman who is still very much alive. She’s 69 in real life, but I still think of her as being 30-something. That comes in handy in this plot.

To the friends who recommended the movie to me, thanks! I laughed out loud until I cried.

Despite what the movie suggests, neither Doris nor her mother were hoarders. They were real people living in a real home. That home has a few more possessions than perhaps the average home, but still, this was not a crisis. Also, there was no dust, only one cat, and everything shown in the home was functional. Only one ski? She was willing to donate it when asked. One armload of magazines? Don’t make me laugh. That doesn’t even rate on the Clutter Hoarding Scale. Books lining the steps? They weren’t even ankle deep. This was a house where people-not fictional magazine families-lived.

But let’s go with the idea that this was intended to be a cleaned up, Hollywood portrayal of hoarding for a moment. Here’s what the producers want you to know, and it’s a good lesson. There’s a story in there. There’s more to the story than what you see.


When Doris “snaps” over someone else deciding to discard a broken pencil, we have already been let in on the secret that the pencil was chewed by her love interest, and is a much sexier pencil because of it.

Recently I read an article about how we select our life partners, focusing on putting our best qualities forward, and knowing full well the other person is probably doing the same. Instead of searching for the perfect mate, we should be searching for a mate with a kind of crazy that goes with our own crazy. On our first dates, we should be asking, “So what’s your brand of crazy?” As for Doris the Hoarder, just because we don’t see the threads that weave the crazy, doesn’t mean that her crazy is irrelevant.

This is a movie, so of course there is an epiphany, a desire to start fresh, and a need to wrap up in about an hour and a half. I won’t spoil the movie for you, but the golden message is that many people can and will make a change when it’s right for them, not when it is right for family members, friends or therapists.

When it comes to changing our home environments for any reason, whether one has a diagnosis or not, the right team makes all the difference. Doris’ team eventually consists of her therapist, her best friend (who has endearing issues of her own, (proving that we all cultivate our own brand of crazy), and family members who are willing to step back and just be helpful heavy-lifters, instead of judgmental, pushy and argumentative.

While I was watching this film on the plane, my daughter was watching the movie Zootopia, and Shakira’s (I want to) Try Everything was bebopping in her earbuds. I was struck how it was the exact same story, but with more fur. Modest beginnings, high hopes, friends, breaking barriers, love, embarrassment, crash and burn, self discovery, growing up a little bit through the process.

After all, all of us hang onto something. Yes, all of us (even those who deny it because they left it at their parent’s house). You’ll be cheering for this sentimental gal at the end, yelling out, Doris… wait!

Also, the movie reminded me how fun NYC is. Might have to plan a trip there soon. If any of my New Zealand friends want to visit, I’ll happily play tour guide.

Did you see Hello, My Name Is Doris? What did you think of it?

15 Hidden Storage Spaces in Your Home

Six Signs Your Kitchen is Outdated

Creative Organizing: You Already Have What You Need

How to Organize a Gym Bag