. There was too much to share in yesterday’s article, and I knew you were going to have a lot of the same questions I had. If you haven’t already, you’ll have another chance to enter the giveaway for your very own LyveHome unit down below. 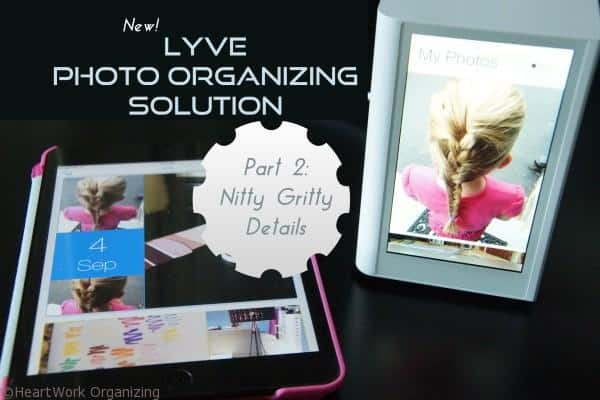 Is Lyve a Cloud Solution?

How much space do you get? The Lyve unit holds 2 TB of storage. That is double the amount that Flickr offers users for free (and more than recently announced increased storage amounts for paid Dropbox users and iCloud Drive). But remember, this is NOT CLOUD STORAGE. LyveHome is a device that you physically own. That makes it potentially more secure and potentially easier to access. You also don’t have any of those pesky issues with your naked celebrity photos ending up hacked in the cloud. (Warning, this is still a device attached to the network, so it’s vulnerable to the extent that anything connected to the internet is vulnerable.) And you won’t pay a monthly or annual fee for a service.

What’s So Cool About Lyve?

Lyve is a very sexy, specialized photo and video storage and management solution that, once you download your photos and videos, lets you access any picture or video, from anywhere, as long as you can connect back to your LYVEHome unit. That means you can you get to your pictures on the LyveHome if you are on location anywhere that has wi-fi, like at the coffee shop or at the office. Details here on connecting to LyveHome outside of your home.

My Experience with LyveHome and the Lyve Apps:

Did you see the first article on my experience with LyveHome and Lyve Apps here? I downloaded photos from my ipad, my Windows PC, my Eye-fi card from my DSLR camera, and a flash drive.

It started loading from the iPad into the app first. My iPad camera roll has 2,879 photos + 80 videos. It took about 20 minutes for my pictures from the iPad to start showing up on the unit.

Then I downloaded the “app” (what we used to call software) onto my PC: https://www.mylyve.com/apps. Once downloaded, which was super easy, I selected just the folder of my children to download, with nearly 2,000 pictures in it. I liked that I could select just the folders that I wanted to download. Not everything that lives on my PC needed to be safeguarded.

I did have just a bit of trouble on the initial download, which wasn’t actually a big deal, but it might be your experience, too. My PC is wired via Ethernet to my router, so I have good speed to the PC, but the router is in the basement on another floor, and I felt like my Lyve unit was having some difficulty either staying connected or getting signals. Really, what was going on had nothing to do with my PC; I didn’t have the “Power Copy” option turned on my iPad, and I kept removing my iPad from the house or turning it off at night, which stopped the transfer process.

To speed up the initial transfer process, there are several things you can do. If you are able to connect the LyveHome via an Ethernet cable to the port on the back of the LyveHome this will give you the best user experience for collecting all of the photos from your different devices. The LyveHome can be connected via Ethernet or WiFi and so can be in any room. If you are receiving some interference and/or weak signals when connecting to your wireless router, move it closer to the router or look in to changing the topology of your home network as to create a stronger signal within your home.

Midway through the transfer process, the PC said there were 4,712 photos and 132 videos, the LyveHome said there are 624 photos and 14 videos, and the iPad app simply said it has 2,613 items left to copy. I was a little worried that these numbers weren’t all the same. However, during the collection process it is normal to see differing numbers across the different devices because of how the Lyve ecosystem processes and collects your photos. Once the LyveHome and devices finish syncing everything together, those numbers leveled out and were the same on all dashboards.

It took close to 2 weeks to complete the initial transfer from my PC and iPad, but that was my fault, because I kept shutting off the iPad or taking it out of range. Be sure to follow these instructions:

Make sure all devices in your Lyve account are online: launch the Lyve app on each device and let it run in the foreground. Enable Power Copy within Lyve Settings and plug your devices in to power. Power Copy support at Lyve


Getting pictures off of media like flash drives and SD cards was painless and quick, taking just seconds. SECONDS! Honestly, it happened so fast, I didn’t even have time to get a picture of what the screen said in process. It plugged it in, turned it to the front, and it already said finished! 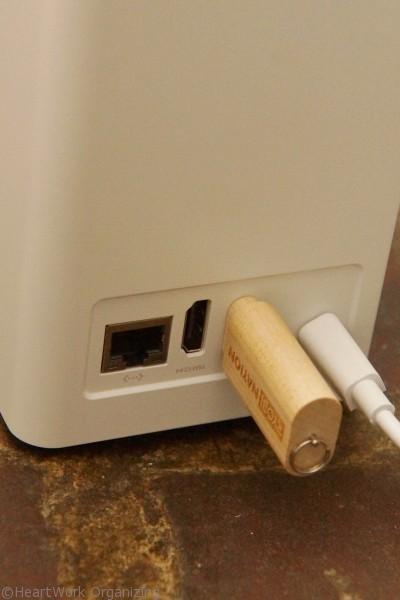 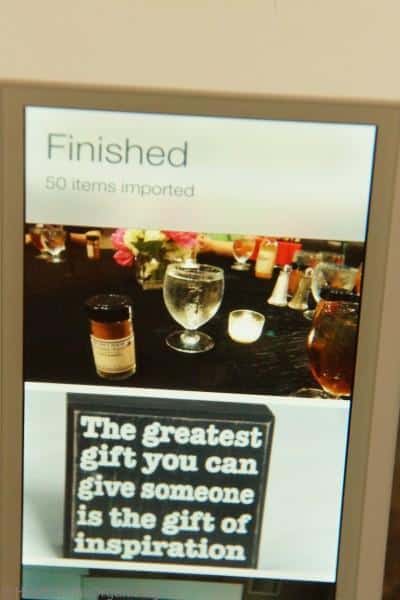 Don’t plug this into an outlet that you regularly use. It stays on all the time, and doesn’t need to be near your computer if you are doing downloads over your in-home wi-fi, so feel free to put it someplace where you can enjoy it the photo display, not necessarily in your home office.

Is Lyve a Safe Backup Solution for Photos?

You guys know I’m all about the backup. I preach a 3-location plan: your primary location (your computer), an onsite backup, and a cloud based dedicated backup service like Carbonite and Backblaze. Lyve would qualify as an onsite physical backup just like an External Hard Drive. It just does the job so much more elegantly and completely than other backup drives, but it only does it for photos and not other types of files (like documents and spreadhseets). You can also backup your LyveHome to another LyveHome, which sounds like an excellent solution, even though it’s a little pricey. You can add a second LyveHome to your account that will mirror the first unit creating a redundant copy. When doing this, you might want to keep that second LyveHome in a different physical location, i.e. your office or a family members house. This allows an off-site backup while also enabling you to share your photos elsewhere! For additional information take a look at the article about Using a second LyveHome to backup your memories.

How easy is it to find something again once it’s on there? You must use the app, not the LyveHome device. Just go onto your computer or smartphone to tap or scroll to the photo you want.

The display on the LyveHome is essentially a very cool digital photo frame, but the ‘carousel’ feature selects randomly from all your photos. Lyve states they are working on different organizational features for future updates, such as freezing the display or only show a subset of pics on a loop, only looping pictures from my last vacation.

It claims to remove duplicates. But like anything else, that means the file data must be identical.

Lyve does not copy photos directly from DropBox, so computer users will want to move photos that are automatically downloading over to their computer, where they can then be copied to Lyve. But stay tuned for inevitable improvements.

How do you delete photos? Once loaded onto Lyve, you have to delete unwanted photos and videos from LyveHome via the app separately. That means you may still have a copy on your phone, DropBox, or wherever else you are loading them. You must delete them off an app, not the unit itself. Best practices, then, would have you cleaning up your camera roll on your smartphone or doing basic edits on your computer at regular intervals before opening the Lyve apps and downloading to Lyve.

LYVECast: When enabled, photos from your LyveHome can be viewed on your VIZIO smart TV. Whoa.

Are there any Problems with Lyve?

The Lyve app on your smartphone could be a little confusing for some people who don’t realize they are looking at another application, and not their native camera roll. It’s actually a lovely display. You just need to keep in mind that the content on your camera roll can vary from that on your Lyve display, mostly because Lyve is not keeping your views in sync. Rather, it is downloading photos from your sources. So if you delete photos from Lyve, they don’t go back onto your camera roll.

There was less metadata (information about the picture) via LiveHome than I’d like to see. I can see a subset via the ‘…’ on the picture view in my iPad, and this is also something they are working on improving.

And all these improvements they are promising? When they first released Lyve back in the spring, it didn’t even upload photos from your PC, and now it does beautifully. While I was testing the unit, they actually released a whole new interface for the PC, so improvements are definitely happening in real time.

Lyve probably won’t do absolutely everything that you want it to do just yet, but it’s improving in leaps and bounds, and it already has most photo organizing solutions out there beat in cost and performance.

I wanted to know if you can give your distant family access to your LyveHome? Can your mom in Wichita
see your photos on your Lyve unit in New Jersey via her app back in Wichita? The answer is yes, by creating a Lyve account and signing into it across all of your devices, the Lyve service is able to connect your devices and enable them to communicate with one another to exchange your photos and videos. In the above example your mom in Wichita would just need to sign in with the same Lyve Account that is used to sign in to the LyveHome. The photos are securely transferred and protected with your password. We recommend choosing a strong password and only sharing it with people whom you trust.

Where can you buy Lyve?

You can buy  LyveHome Photo and Video Manager

from Amazon (this article has this and other affiliate links embedded). Youcan also buy it directly from LyveMinds and use code this code for free shipping: LyveUnleashed.

Do you want your own LyveHome? Of course you do.

Did you see yesterday’s article on organizing with Lyve? Then you probably already entered to win your very own LyveHome. But you can tweet or pin again for another change to win. Go for it!

Do You See Things That Aren’t There?