Franklin was seven. He could tie his shoes and count by fives and clean his room when his mom asked.

Fans of Franklin Turtle will recognize how each books starts, by listing some things that little Franklin could do now that he was getting bigger. If a turtle can do all of these things, my girls can, too! 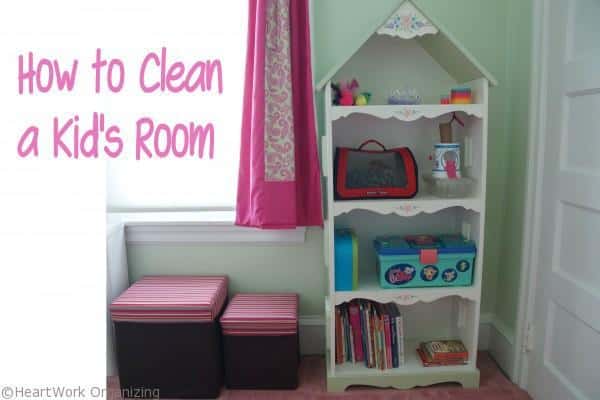 My “room cleaning” formula has always been pretty simple for the girls. Despite my love of lists, we do not have this written down anywhere, but they could tell you in a heartbeat that a clean room means:

That’s pretty much it. Honestly, they were doing this since they were two or three.

But this bookcase was really starting to drive me batty. Seven year-old KittyCat and I talked about how it didn’t look nice, but she just didn’t seem to have a plan of her own. So, I give her a couple of days notice and told her that we’d organize it together this summer. 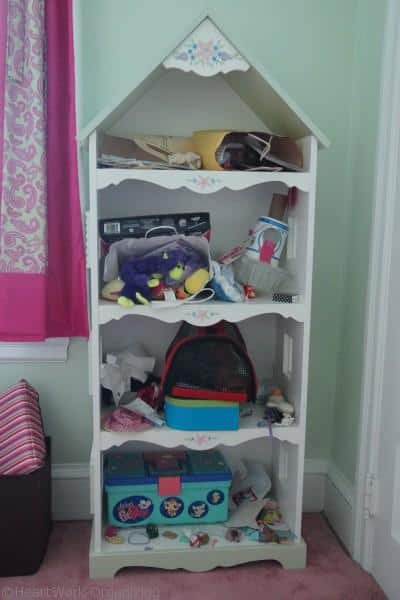 Here’s the formula for success to clean and organize a kid’s room.

We tackled this on a Saturday morning, right after breakfast when we both were fresh. Neither one of us had plans for hours, so we weren’t in a hurry. Being well-rested and not rushed is so important to a good outcome.

I used the same process I use with my clients. 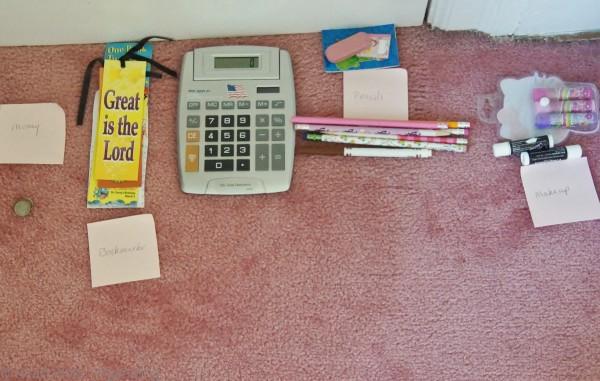 It took less than 30 minutes to get through the bookcase. We emptied all of the bags and boxes, and decided what should really go in them. (Really, if I never see a birthday party goodie bag again, it will be too soon.) By this time, she was into a groove, so we dumped the toy boxes next to the bookcase and went through those, too. 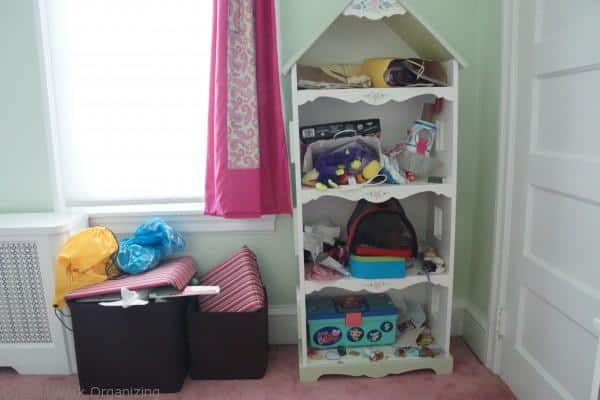 Then we tackled the one drawer in her dresser where she keeps her “treasures”. She wanted to do it, but then she hesitated and turned to say, “Mom, don’t get offended, but there’s some candy in here.”  So sweet. I assured here that although there really shouldn’t be candy in her room, she wasn’t going to get in trouble. When we found it, because you know there is always a melted lollipop in the bottom of a little girl’s drawer, I just explained how it would attract ants and we didn’t want that. She was cool with that.

I’m pretty sure that there will come a day when I’ll wish that all I found in her dresser drawers was a melted lollipop. This, I can handle! (Note to self: check more often for candy.)

I wasn’t prepared for a little girl who collects rocks, and we talked (again!) about how the rocks really belong outside. She took them out to be with their friends. Maybe I’ll think about getting her a rock display case for Christmas. 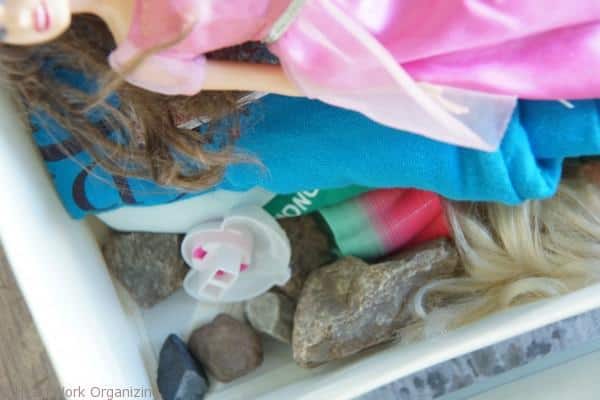 Last, we went through the jewelry. I thought this was going to be overwhelming, but it wasn’t. It turns out that she was keeping hair stuff in her jewelry box, so we moved that to where we actually keep the hair bows and ribbons. Then there was plenty of room for her rings and things. 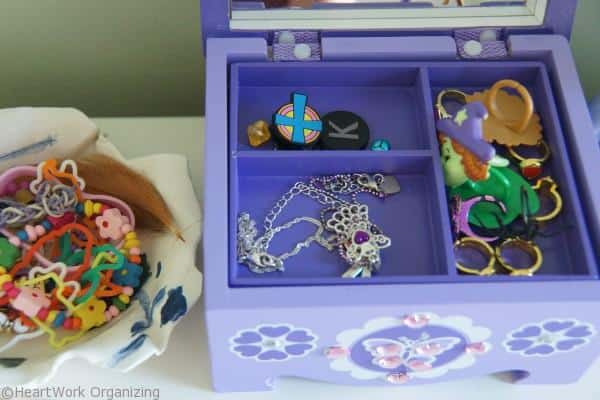 Once everything was sorted, I asked if she thought we had gone through everything, and she agreed we had. Then we worked to put things back on the shelves so that it looked tidy and made sense to her. No, it’s not Pottery Barn pretty. That little plastic mess on the right? She made that for a recycling project at school. It’s a play house for her Littlest Pet Shop toys. Not showroom quality, but adorable nonetheless, and she’s very proud of it. 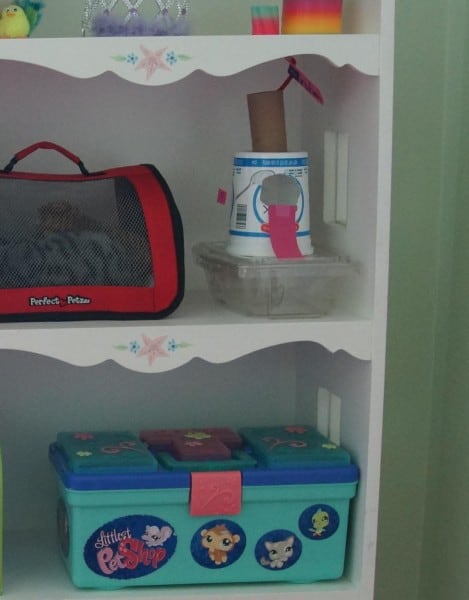 She helped me put everything away that she had squirreled away in her room, relocating them to other parts of the house or garden where they belong.

The last step, which is always the most important for both kids and adults, is to Establish a Maintenance Plan, or decide how to keep it clean and clear. In this case, I asked her to tell me what we had put where, so she knew how to do it. 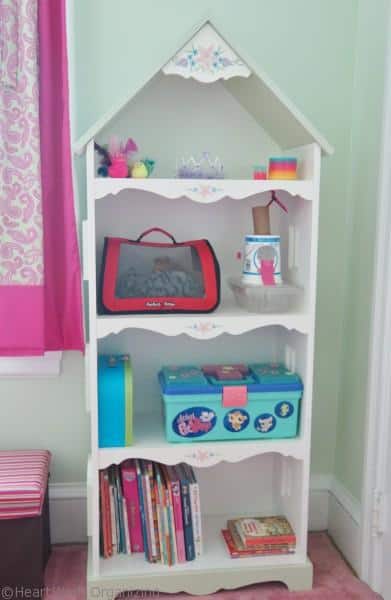 Like any job, it doesn’t really matter what I think. It’s always the client’s assessment that matters. When I asked if she thought it was better, she said, “It is WAY better!!!”  Even more, she said, “I like organizing with you, Mom.”

Did I mention that I thought I was going to have to do some yelling and tough love? Nope, I was able to honestly say, “I like organizing with you, too, KittyCat!” 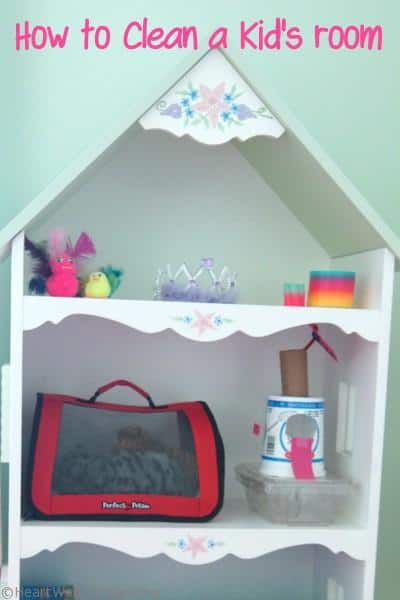 If you are the pinning type, I’d love it if you’d hover or click on the image above and add it to your boards on Pinterest. We all know some mom who can use a little room-cleaning encouragement.

Kid Snacks: Fend For Yourself

Things Pro Organizers First Notice When They Walk in Your House

Tips for Keeping your Kitchen Organized