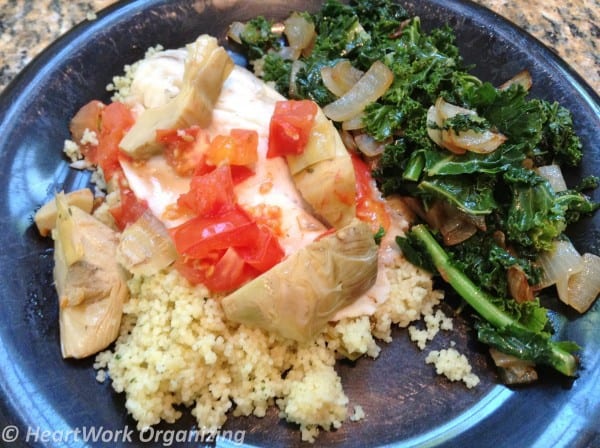 It doesn’t happen very often, but when even my six-year-old eats dinner without whining, I figure it might be a meal worth sharing. Grilled fish with artichoke couscous and a side of kale was a winner at our house.

Everything but the kale came from Aldi, my favorite store. It’s easy to get in and out of their stores, because it’s only 3 aisles deep, and there is usually only one choice per category. That’s your organizing tip for the day. And yes, their food is good. Better than good in most cases. 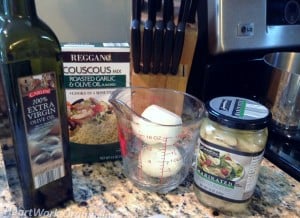 Dice two onions and saute in olive oil in a large soup pot.

Chop a bunch of kale, washed, and add to the onions when they just turn brown.

Add a pinch of coarse salt and let the kale cook over medium heat for about 10 minutes. Cut the heat off before it goes completely limp.

(Disclaimer: This is the only thing I know how to do with kale. My kale chips were not yummy, but this is. Do you have a better idea?)

Prepare one box according to directions. Add a half jar of marinated artichoke hearts on the final step. Set aside.

Partially thaw one fillet of flounder per person. Place each fillet on it’s own sheet of aluminum foil.

Cover the fish with two spoonfuls of marinated artichoke hearts and a half of a diced tomato. Sprinkle with coarse salt.

Wrap the foil into a closed packet around the fish. Grill over an open flame just until the fish seems flaky. About 10 minutes. Avoid over-cooking. 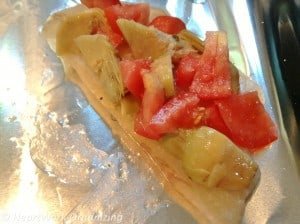 Plate it up, and enjoy. 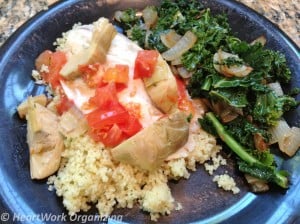 Organizing Advice: See It Through to the End