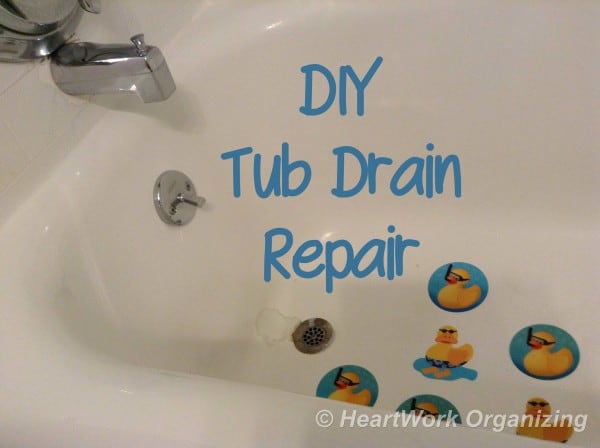 Tub drain stoppers often fail, and I’ve know many families who just live with it, but we can’t do that. With just one tub in the house, and two young girls who are still terrified of the shower, it had to be fixed. Even worse, it was stuck closed.

Now, I realize this isn’t actual plumbing, where you have to turn off valves and cut copper and such, but still, this repair involved something that went into the wall, which almost never means easy. Still, I figured it wouldn’t hurt to take a look.

I took off the couple of screws, and saw that the back of the little toggle had just given way. It looked like I might be able to get a new doohickey that sits on the front (also called a trip lever faceplate) and hook it up to the internal stopper that was most likely original to the house and the 100 year old cast iron tub. (That’s the part going into the wall, which I did not have to remove. Yeah!) 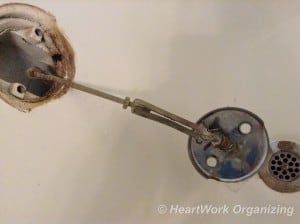 Luckily, I live five minutes from a plumbing supply house which had the faceplate, and my favorite hardware store in the world, which had the cotter pin, which I now know is a “split pin, a metal fastener with two tines that are bent during installation used to fasten metal together, like with a staple or rivet,” according to Wikipedia. 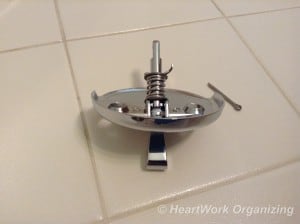 The repair took ALL DAY. No seriously, the repair took less than 10 minutes, but on a day when I was sick and just wanted to lay in bed but still had to cart two kids around town in a 96 degree heat wave, well, plumbing repairs were not high on my list. But a soothing shower was very high on my list!

Yours might be a different type of stopper than mine, but just in case, here’s the how-to:

1. Unscrew the existing faceplate.
2. Remove the old cotter pin by squeezing it together.
3. Align the new faceplate and put the new cotter pin in, opening up the ends. I had to push both ends to one side so it operated well.
4. Carefully drop the plug back into the channel and screw the faceplate back in. 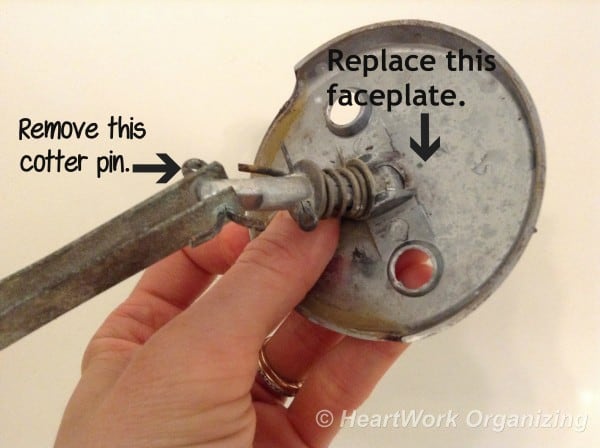 Even this was do-able in my impaired state, and now we have a working tub once again. Commence with the happy dance. Nothing makes me happier than avoiding a $100 plumber’s bill. 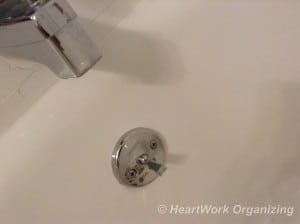 What about you? Do you have a tub drain that’s not behaving properly?

Timber! Take Care of Those Trees

How to Clean Your Keyboard