It’s not usually all Hurricane Sandy info here.  Please subscribe over on the right to get useful organizing and decorating info all throughout the year.  Thanks!

We just went through Hurricane Sandy.  Most people took precautions, planned for the worst and hoped for the best.  Still, there are some things people wish they had done differently.

A few people wish they had another way to charge their phones during a power outage.  If you don’t already have a car charger set, this is a handy little kit to have. Unlike a charger you buy with your phone, this Energizer® XP1000K Universal Travel Power Kit with 1000 mAh

, for under $30, can accommodate many types of devices. 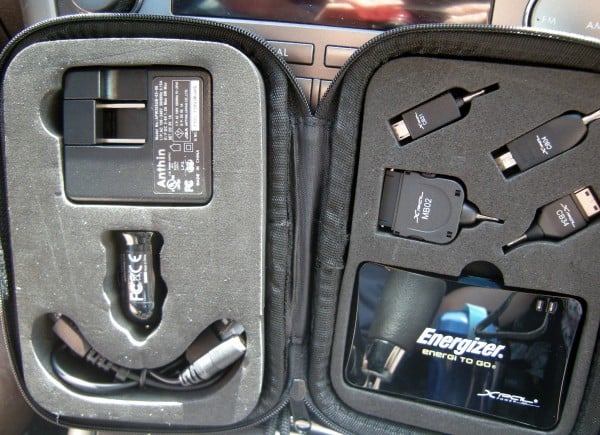 But you have to always think of safety in a storm.  Do not sit in your car while your phone is charging.  A building is a much safer structure than a car. One person found this out as a tree came crashing down while he was charging his phone. Oops. He later said, “I went out and sat in the truck to charge my phone and listen to the news. I was out there maybe 5 minutes and the tree fell on me.”  Oh, and he said a few other choice words not printable here. Thanks, Nichole, for letting us know about the Motorola Power Pack. 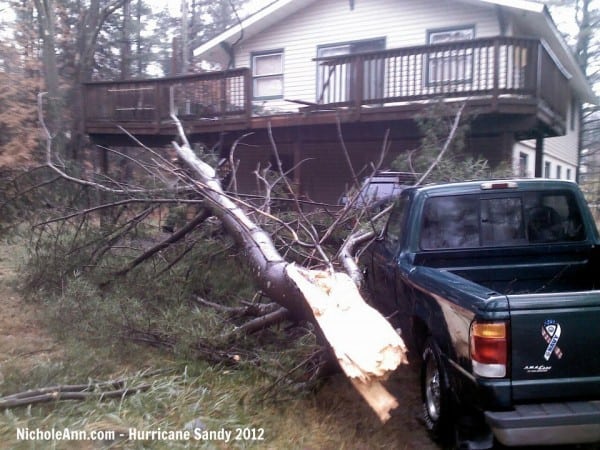 Cindy says she wished she had made sure that her grandmother was better equipped.  Her grandmother’s power went out, and her husband had to hike across state lines with a portable heater, extra flashlights and canned food while Cindy held her own fort down, with a small child at home.  This was a common theme as Nancy worried about her elderly mother who did not evacuate off the Jersey shore. Maria wishes she had checked her parent’s supplies and not just taken their verbal assurances that they were ready, and we worried about my own husband’s mother who lost power in NJ.

Nancy did just fine in the storm, but she has disabled family members.  She’s working on a notebook for emergencies, so her family members will have the right resources listed all in one place if she, herself, isn’t available to help them next time.  I found several resources for disabled persons on the National Multiple Sclerosis Society’s website.

.  The few bucks I’ll spend on the unit can save thousands of dollars of damage if we lose electric and the sump pump stops working.  We’d be flooded in a very short time. Carrie took the words right out of my mouth, “Wish we’d gotten a battery backup for our sump pump. Basement is now flooded and it would have cost WAY less for the battery back-up than the damage we’ll now have to pay for!”

Stacy says she wishes they had gotten a generator, and will definitely get one, now.  They had to have three feet of water pumped out of their basement yesterday.  Small home generators are getting very popular now, but please use them safely.  There was at least one death from CO poisoning from a generator not being operated properly. Of course, there are thousands being operated properly, but still, I’ll pass on that risk.  But if you are prone to outages or flooding, have stored breast milk in a freezer like Amanda (we call it liquid gold), or have a family member with medical complications, a generator is a really good idea.

Some people this week will be shocked to find that their damage isn’t covered by their homeowners policies.  Flood damage, after all, isn’t required or affordable for all homes.  If you don’t have flood insurance but now wish you did, start the process by reading up on what flood insurance is and isn’t at http://www.fema.gov/national-flood-insurance-program.

Don’t overlook the obvious.  Barbara said she wished she’d gotten more batteries. She thought they were okay, but didn’t check quantities before the storm. At our house, we spent the two days before running all of our rechargeable batteries through their charge cycle.

Minor maintenance can be a lifesaver, too.  Stephanie says she wished she had caulked her windows again.  We took a few minutes here with masonry patch in our basement.  We still have porous walls, but our basement was much more dry than we’ve seen before.

Jacqueline says she could have brought in more food that didn’t need to be heated.  Ya know, going out for dinner in a hurricane isn’t really an option. Good items to have on hand are peanut butter (or Nutella) and crackers, a pot of cooked but undressed pasta in the fridge, hard boiled eggs, fresh fruit, and apparently cooked bacon.  Other good items are boxed  or canned soups, canned tuna, and canned beans, which can be added to the pasta or nachos or mashed up for a bean dip. A few moms I know got really serious and bought shelf-stable milk for their kiddos, but you can also eat cereal with OJ.  Oddly, it tastes OK.  In a pinch, energy bars will do the trick.   But the most important item in situations like this may just be a manual can opener (affiliate link).  Do you have one?

Lindsay was worried about trying to keep the kids busy.  She wishes she had more activities planned for her young kids (see the activities that kept my kids busy during the storm) and a battery-powered radio.  Even better, I have one of these little crank radios in our household emergency kit.

It’s not too late to take action.  NOAA states that hurricane season officially goes through November 30.  And after that, of course, is snow storm season.  Use the sunny days in between to get ready.

This is the last in my admitedly unplanned series of posts about major storms. Did you miss the others?

Keeping kids busy in a storm

How to prep for a storm

Do you have an item or two that you wish you would have taken care of before Hurricane Sandy?

Staying at Home? Enjoy the Great Recess (self care during coronavirus)