Did you miss something last week? I wasn’t playing a trick on you last Thursday, but you can now see the before and after one-day condo unpack post.

Also, thanks to Cindy D. for entering and winning the very cool Grid-It organizer, perfect for Dad’s tools or gadgets. But don’t limit this to Dad’s stuff. It’s a great little idea for anyone who loves the idea of old school pegboard, but with a modern twist.

Does this remind you of you or someone you know? Overheard this week: “I’m getting organized. I got a whole bunch of huge bins, and I’m putting my clutter in there. They’ll go in the basement. But I haven’t put the lids on because I’m afraid I’ll forget what’s in there.”

There are two classic mistakes I see all the time. The first is bringing in another new surface, usually a card table, to hold stuff while you get organized. I’m often called in when that card table has grown roots and lived in the space many more months than originally intended, as happened here: 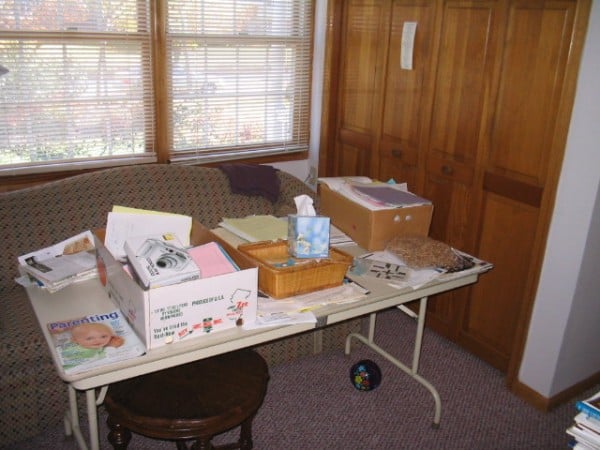 And bins! In the store, they seem like such a good idea, right? 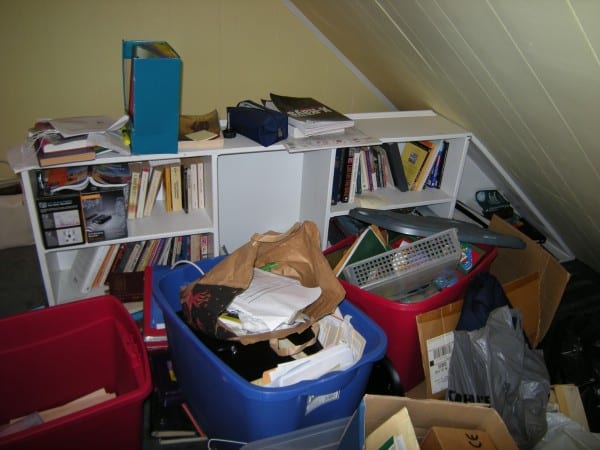 But the containers are often the problem.

(Here’s an interesting fact. Did you know that plastic will burn faster and hotter than wood or paper in a fire? Keep less fuel in your home.)

Remember, in the 5-step organizing process, Containerizing is step 4. Don’t buy anything to get organized. Instead, use those bins as temporary sorting stations. Once you’ve sorted similar items together, it will be much easier to make decisions about what you want to keep, paring down items for the available space you do have.

Those bins? They can be labeled with great detail and used to store only those essential items that truly do belong in storage.

And the card table can finally be used for cards again. Or a makeshift bar. Or a table for that sewing project you’ve been meaning to start up. Anything besides a paper-shaped speedbump in your house.

How to Choose Bed Linens for an Organized Bed

Organizing Tip: Before you Head to Consignment Sales

How to Lose 10 Pounds: 3 Steps to Better Willpower